Monastic, cool, ethereal? In many ways L'Eau Froide is anti-Lutens, whereas Passage d'Enfer is L'Artisan Parfumeur down to the most minuscule detail. Though both brands are pioneers of niche, as Now Smell This notes they're a "study in contrasts". The Byzantine plot of a typical Serge Lutens is bringing the exotica of the Moroccan souk into a 19th century aesthete's dream sequence and from there into an urbanite's esoteric scent collection. L'Artisan on the other hand approaches perfumery via a luminous, refined, transparent approach as championed by founder Jean Laporte and perfumers Jean Claude Ellena, Olivia Giacobetti, Anne Flipo and Betrand Duchaufour. Even the ambers in the L'Artisan line are diaphanous instead of thick whereas their woody and "green" fragrances smell the way psithurism sounds.

And yet...Inhale the icy ringing air coming from the thundra filling your lungs. Feel the chill of cold water in a silver-tiled pool where you anticipated warmth. Remember the surprising burning sensation on your tongue upon munching an ice cube against the hardness of adamantine. Feel the wet, clean feel of stones in a brook. And imagine a kiss from dead lips... If De Profundis aimed to capture the scent of death, the cold tentacles of a serene end to all can be felt in L'Eau Froide, from the pristine white-lined coffin to earth's cool embrace. I personally find this philosophical attitude to mortality very peaceful and cleasing to the mind. And not totally antithetical to the ethos of Lutens, come to think of it.


The terpenic, bright side of Somalian frankincense (reminiscent of crushed pine needles) is given prominence in Passage d'Enfer, much like in the Lutens 'eau' which unfolds the terpenes after a fresh mint start; this exhibits a hint of pepperiness (could it be elemi, another resin?) giving a trigeminal nerve twist. The effect is dry and very clean indeed (but unlike the screechy aldehydic soapiness & ironing starch of the first L'Eau), with a lemony, bitter orange rind note that projects as resinous rather than fruity and a projection and sillage that are surprising for something so ghostly, so ethereal, so evanescent. It's the scrubbing mitt of a monastery in the southern coastline, rather than the standard aquatic full of synthetic molecules dihydromyrcenol and Calone coming out of the cubicle in an urban farm.

Still this aesthetic is something with which the average perfumista hasn't come to terms with yet; it will probably take a whole generation to reconcile perfumephiles with "clean" after the horros that have befallen them in the vogue for non-perfume-perfumes in the last 20 years. I'm hopeful. After all being a perfumista means challenging your horizons, right? 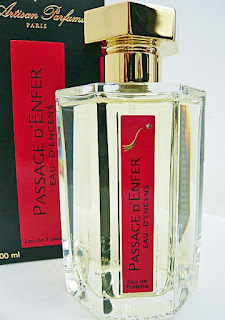 Both are available through niche distributors at more or less comparative price-points.