Among perfume terms which are used to describe fragrances some are more confusing than others: what defines a dry scent, what is a balsamic smell and, come to think of it, is aromatic what immediately leaps to mind? One might be inclined to think the descriptor denotes something "having an aroma" or something to do with scent in general, as in "aromatherapy". Yet, in perfumery jargon the term "aromatic" means something more precisely defined.


Strictly speaking, the chemical definition relates aromatic to materials rich in benzene, a conjugated cyclic carbon compound found in organic matter (also known as arene). Penhaligon's Douro is an example, if you need to put a smell to a name. Aromatic in layman speak refers to smells that have a rustic scent, with a certain freshness, often in relation to herbal notes; some sources correlate it even to some balsams and resins. "Aren't balsams and resins generally sweetish, though?", you ask.
You see, the term 'aromatic' was originally assigned before the physical mechanism determining aromaticity was discovered, and was derived from the fact that many of the benzene hydrocarbon compounds have a sweet scent in themselves. It's safe to say that in perfumery parlance aromatic has gradually gained a specific nuance, that of agrestic, green-herbal and with a camphorous hint, like that in pure lavender essence. The character is vivid, assertive, lively and fresh, one of mental clarity, invigoration and awareness; associations prominently exploited by functional perfumery (i.e. the industry catering for scented functional products instead of fine fragrances for oneself).
In fine fragrance this lively, refreshing ambience is wonderfully caught in Baime by Maitre Parfumeur et Gantier. Aromatic notes are therefore not bitter like oakmoss, but not typically syrupy sweet either! Smell the petrol-like opening of Guerlain's Jicky, rich in lavender buttressed by fresh bergamot and you're there (the fragrance soon acquires warmer, naughtier characteristics nevertheless which go beyond the aromatic).

The herbaceous term -in differentiation of "woody" as in botany- is more of a descriptor than a proper classification: it encompasses such frequent perfumery materials as chamomile, lavender, rosemary, thyme, mint, spearmint, sage, clary sage and even celery, as well as marjoram, oregano and basil. Obviously the materials themselves derive from a herbal plant source, so the term isn't as confusing.
Most people familiar with dabbling in food-making like me, especially ethnic cuisines, know them from their kitchen cabinet. Whenever I cook with these herbs (and it is often, accounted by my Mediterranean origins) I find myself engrossed and enraptured by this humble and humbling splendor of nature; these small stems and leaves are so rich in nuance, so colorful in painting a verdant countryside basking under a benevolent sun, so childlike and at the same time old-wise that I can't but feel overwhelmed by the majestic force of the natural world all over again, like when I was but a mere toddler.

These herbaceous materials couple very well with citruses and spices, lending themselves to both unisex and masculine perfumery, without nevertheless eschewing feminine fragrances ~though the "pure" specimens are rare there, such as Granville by Dior's more upscale private line La Collection Couturier Parfumeur or Donna Karan's Essence Lavender.

Lavender, a par excellence aromatic substance, is a very common ingredient in perfumery, thanks to its linalool freshness and its pleasant association with the outdoors and cleanliness; it's no accident that lavender forms one of the three pillars of the "fougère"/fern family (term explained here). It's therefore natural that ferny smells should be coupled with lavender and other aromatic materials: the two have overlapping facets. This is why you will often see the term "aromatic fougère" brandished in masculine fragrances: this sub-classification within the fougère group indicates a heavier use of refreshing herbal notes in the formula providing a sense of chillness, of immediate freshness, especially since most herbal, aromatic notes are effervescent, i.e. "top notes" in terms of the scent's evaporation arc. Yves Saint Laurent Rive Gauche pour Homme is a perfect example of the genre . 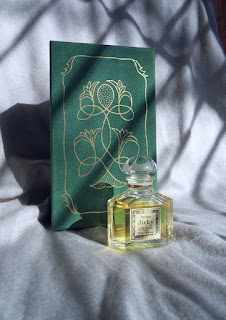 The aromatic descriptor can feature as a supporting player to other stories: In Clinique's Wrappings for instance the aromatic top beautifully highlights the juniper wood of the base. Herbaceous accents can put a classic, cologne-like, aromatic character to a composition, due to association with the traditional Eau de Cologne which fuses herbal notes with hesperidia to render a sharp, tonic scent. The 4711 brand has even created modern variations on the theme in recent years: 4711 Acqua Colonia Lavender & Thyme, 4711 Acqua Colonia Juniper Berry & Marjoram, 4711 Acqua Colonia Melissa & Verbena.
They can also contrast beautifully with a resinous note, like in Encens et Lavande by Serge Lutens where the herbaceous brightness of lavender provides the light in the dusk of the incense. Eau de Jatamansi by L'Artisan Parfumeur is a more straight-forward specimen, where the resinous spikenard gains freshness through the reinforcement of herbaceous accents. The herbaceous facet of rose oxides is played to great effect in Calandre by Paco Rabanne, where the freshness of the composition is thus enhanced effectively.

For all it's worth, perhaps showcased by the meaning of context above, not all herbs provide purely herbaceous/aromatic notes in perfumery: for example oregano, tarragon (to a lesser degree), basil and marjoram can be described as quasi-spicy, thanks to their rich ratio in piquant molecules which tingle the nostrils, much like the exotic dried spices in the kitchen cabinet do, albeit with a slightly different nuance. Even sage has a slightly peppery flavor. Conversely, although Chinese star anise is routinely considered a spice, its high ratio in anethole (the molecule also present in anise and dill) gives it a herbaceous edge.
Pronouncing a judgment on a fragrance that relies heavily upon those elements one might be technically describing a "herbaceous", but the perceived effect could be spicy. Manifesto by Isabella Rosellini for instance relies on the tingling note of basil, a material rich in eugenol (much like cloves), which immediately translates as "spicy" to one's mind. Pronouncing Manifesto therefore as a spicy scent isn't far from the truth, no matter the source of the effect lies in the garden rather than the Indian market. As in everything when attempting to communicate thoughts, it's important to distinguish whether one speaks from a scholarly or a purely personal perception point of view.

pics via nicenfunny.com and aromablog.ru
*Share with link: Monday, July 30, 2012