James Ivory has long been considered the most "British" of American directors, at least going by his Ismail Merchant collaboration (usually with Ruth Prawer Jhabvala in screenwriting/adaptation), which has produced such delicate cinematic gems as Room with a View, The Remains of the Day and Howard's End. In 2003's Le Divorce, however, he tries his hand on the old cultural war between Les Americains et les Français, instead, based on a novel by Diane Johnson. A weak link in Ivory's formidable record, mainly due to an indecision as to what his main focus will be, the film nevertheless produces interesting and subtle little snippets of the cultural and ideological chasm between the two nations in high style and an all-star cast.

Kate Hudson as Isabel Walker is an American film school dropout who jets off to Paris when her pregnant step-sister Roxy (played by Naomi Watts) is abandoned by her French husband. Soon, Isabel has a scandal of her own when she falls for an older French man, Edgar Cosset, who's related to Roxy's cheating husband and is a far-right politician. Totally out of her waters, the nubile, originally hippyish Isabel lets herself be metamorphosized into a chic butterfly, through the sophistication-adding tricks of a bob cut, soigné makeup, co-ordinated wardrobe, an Hermès red Kelly 28 bag given to her as a gift (really, a stand-alone character in the film, a status symbol prop made into powerful allusion), intimate trysts following elaborate four-course meals, and racy lingerie brought for the sheer pleasure of getting out of it. 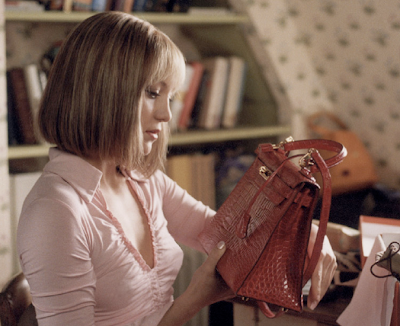 There all sorts of clichés too, accounting to French character assasination, mainly involving cheating Frenchmen, conservative French women, manners & propriety above essence and a contrasting augmented sense of sincerity on the part of Americans as opposed to the Europeans, which involve a pleiad of secondary characters (but true stars, such as Glen Close, Stockard Channing, French legend Leslie Caron, Jean Marc Barr, Matthew Modine etc). If you have been to Paris, it's also a trip down memory lane, as besides the Louvre and the final, downspiral kerfuffle at the Eiffel Tower, you will recognize beautiful Parisian locales such as Cafe de Flore and Le Georges.

Of course there are hundreds of erotic recipes for potions, ointments, unguents and powders to enhance the sexual act. The recipe in Le Divorce involves a special tisane, brewed of mint leaves in orange and rosewater, sipped before the sexual act. The herbs and essences chosen are not random: Apart from their health benefits and aromatic properties, imparting a delicious fragrant steam when sipping, they balance the hormones and open the mind for the pleasure of the senses. Mint is easy on the stomach and excellent for steadying the nerves and for nausea. Rose hips are the seed pods left behind when the rose blossoms fade in autumn. Their sweet and sour tonality is very enjoyable in tisanes, giving a refined, feminine taste. Coupled with orange, coming from the peeled rind of the orange fruit itself, the taste is sweet and bracing, balancing the other ingredients and providing a sensual rounding.
This is an easy recipe to make by yourself, adjusting the ratio of plants to suit your own taste. Just peel a ripe orange, boil the rind with some mint leaves (or a mint teabag) and a rosehips tea bag and you're good to go! After all, in the movie the exact measurements are pointedly never given and there is a sense of received irony when Isabel asks for exact directions as to when to drink and how much. Like French seduction, spontaneity goes further than a pre-planned go-by-the-book approach...

pics via wwcinemastyle.blogspot.com and toutlecine.com
*Share with link: Monday, April 16, 2012