Serge Lutens is doing everything he can to tilt us out of our expectations and into a frantic pace to keep up with his Paris exclusives. We had discussed how there were plans to remove a few of the export scents to the Paris exclusive line two seasons ago: despite Chypre Rouge being a slow seller it never made it there, though Miel de Bois most certainly did as we had announced on these pages.
The most extraordinary development however is the just-of-this-minute delegation of a rather popular and "easy" export into the Paris exclusives in the bell jars. Guess what that is? 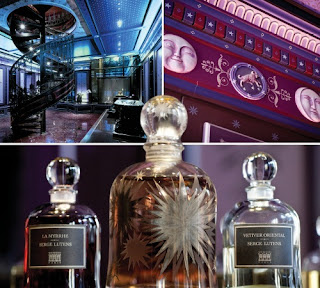 It's Rousse, tagged with the adjective "racy"!
One wonders whether it's because of the spice contient that it needed a less mainstream distribution, but I think that the Paris exclusive line mostly needed some rejogging now that many of the gems have circulated in the export collection already as limited editions. Plus Rousse is rather a slow seller, comparatively, not praised enough.