The newest fragrance by Andy Tauer, Carillon pour un Ange, takes its inspiration from a material that is often described as angelic, lily of the valley. Hence the working name during the creation process was Gabriel. Actually, truth be told, lily of the valley (or muguet as the French call it) is not exactly chastity material as a recent study revealed. Still, the piercingly sweet, very clear and green aroma creates the impression of puerile innocence, of tender cheeks and pouty small mouths. 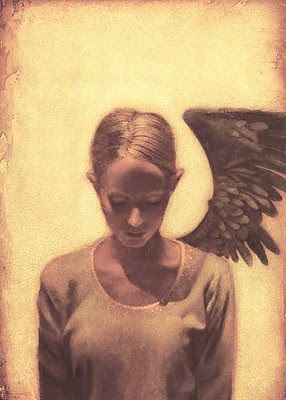 A carillon on the other hand is a musical instrument composed of at least 23 cup-shaped bells played from a baton keyboard using fists and feet, its sound chiming with piercing clarity, much like the aroma of lily of the valley pierces the air with its declaration of spring's final assertion. So carillon pour un ange, a carillon for an angel... The seraphic allusion is certainly not lost, the fragrance is quite lovely.

The greeness in Carillon pour un Ange is delightfully tinted with the darker, oilier hint of hyacinth as was the case in a former Tauer scent, Hyacinth and a Mechanic. Even though the latter was an experimental batch, serving an SOS purpose on its bottle-message across the world (more details here), it featured at least two of the elements which infiltrated themselves in Carillon: the green hyacinth and the leathery note. In Carillon the leather is very subdued. Instead one almost loses the lily of the valley field for the hesperides grove at some point. Tauer has fetish materials which he uses over and over to great effect: I seem to feel his mandarin peel materialise again and again; it's such a great lifting note that it makes for immediately inviting openings, often coupled with rose as in Une Rose Chyprée, or Incense Rosé. (click for reviews of both)

The challenge with lily of the valley is twofold: One the one hand, it's so easy to lapse into the "salle de bains" hygienic note or the Aisle of Glade (as March puts it), due to its ubiquitness in functional products via several synthetic replications (natural extraction is not cost-effective or yielding enough). Andy Tauer is using a combination of IFF's Lyral and Lilial for his own creation, bypassing the problem of sharpness by the injection of a sweet note reminiscent of violets and lilacs (pink jasmine might be actually creating the lilac impression, the two share a bubble-gummy nectarous headiness).
One the other hand, there is the sacred Diorissimo, an über alles classic if there ever was one; impossible to surpass and one would be wise to not even try. Then again, now that Diorissimo is not recognizing itself in the mirror all too clearly these days due to multiple surgical interventions, one might reconsider. Still, the cleverness lies not in trying to create a limp-wristed or sharp rendition of lily of the valley, nor a pastoral gouache, but to boldly propose a third path: that which marries the white bell with other flowers and which contrasts it with elements to which it is naturally emerging from: the decaying leaves being eaten up by fungi, the woods where it grows, the green tapiserrie on which it sprouts its minuscule bell-shaped blossoms. Thus the base of Carillon pour un Ange takes on woody and skin-soft nuances, mossy, non dirty really (it would be paradoxical, after all), with the shades of love, death and rebirth winking to a theatre full of children watching mesmerised a play of magical marionettes.

Polish composer Zbigniew Preisner says "For me there exists only one music﻿ -good music"...and "I compose what is close to my heart". Substitute music with perfumery and you've got Tauer to a T.

Painting Sleep lost in Dreams by James C.Christensen via morgenthruston
In the interests of full disclosure I sampled the perfume through the generosity of the perfumer himself; his is well documented.
*Share with link: Tuesday, July 13, 2010