Shalimar with vanilla exalted...the upcoming fragrance by maison Guerlain is taking the beloved gustatory note into new heights, after several games with it (Spirituese Double Vanille, Cuir Beluga, Ylang & Vanille etc) in other fragrances. Lovers of the classic will take note, while new converts will find a new spin on the old. Hopefully, not too patisserie-like... 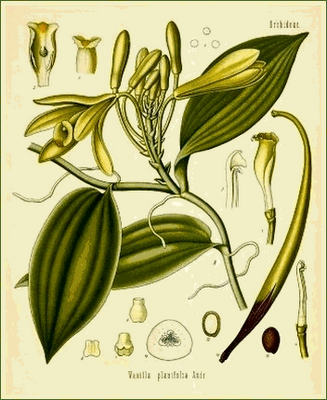 The iconic Shalimar (and Guerlain in general) has always relied on vanilla, but this time they're capitalising on two precious varietal essences which will infuse the upcoming Ode à la Vanille (Ode to Vanilla) in a new bottle designed by Jade Jagger. The new fragrance is a limited edition to be released later this year.
A unique composition of 2 types of vanilla, it includes vanilla tincture from Mayotte (teinture de vanille) and Absolute de vanille from Madagascar. Created by in house perfumer Thierry Wasser.
50ml/1.7 Fl.Oz for $110.00

As reported on Basenotes by Primrose
*Share with link: Tuesday, July 13, 2010