Mystery of Musk Project: Kickstarting with Kewdra by Anya's Garden

The Mystery of Musk began as an innovative project in which natural perfumers tried to render a viable, sustainable animalic musk through non-animal sources. As we had announced, the time has come and now we're reaping the benefits of that effort. Samples have flown across the globe, mixing the arcane with the imaginative and the puzzling, challenging us into coming up with the right words to do them justice. Expect to see posts tackling these new perfumes and a giveaway of a whole bottle of them tomorrow. So check up daily for news and updates! 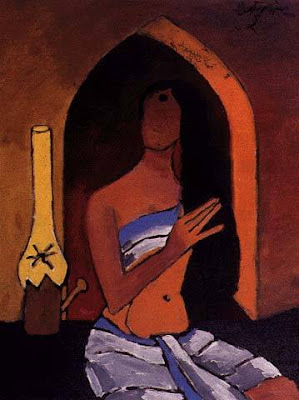 As homage to the instigator of the project and the president of the Natural Perfumers' Guild, I decided to kickstart with Anya McCoy, no stranger to these pages, whom most of you know from her fragrance line Anya's Garden. Literally, as she grows all sort of interesting and lush things in her Miami Shores garden, things that would take your breath away.
Her entry? Kewdra, a “modern Indian-style musk perfume”, inspired by Alobar’s Hindu beloved, the highly-fragrant Kudra, as featured in Tom Robbins’ famous novel Jitterbug Perfume. Anya introduced it thus: Kudra surely loved the Kewda flower of her native India and would have blended it as a masala formula that spread the gardenia and boronia flowers in a seamless heart that beats over the Kama-Sutra evocative "smell of your lover's skin" base notes.

Natural perfumes create their own web of intricacy, their drawbacks just as a many as their advantages, the challenge lying into making the materials pliable and tenacious enough to conform to classic perfumery needs. Pandanus has been already used in her unique Fairchild while an animalic note from the most improbable source (tincture of a real living rutting billie goat's hair) was explored in Pan. So you could say that Anya knows more than a few things about how to construct a complex animalic.
Pandanus flower- aka Kewda or Kewra- is the star performer in the new fragrance, a diva-esque scent which reminds me of an ample-blossomed lady spilling out of her tube top. I knew Pandanus flower from Indian chutneys which customarily accompany meat dishes, where its honeyed facets reveal themselves like liqueur; I also knew boronia from my trip to Australia, where the magical smell permeates the air when in season. 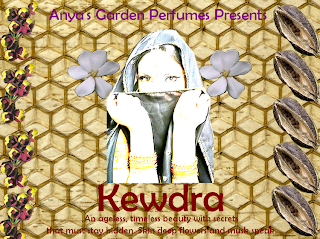 Then of course there is also beeswax in there, an exalted animalic note produced through a gentle technique involving bees' complex constructions without harming the animals.
In Kewdra pandanus makes its entrance all a-bust, proud, heavy, rich. But the effect dissipates soon, leaving a mingle of flower essences (Anya used a rural Chinese 5-petal gardenia which I can only assume is supremely costly) and natural sources of musk (such as angelica root and ambrette seed). These blend into a sweet, smooth vibe which licks the skin the way an Indian heroine in the Kama Sutra would.

Getting into the process of Kewdra requires a little patience but once you're there, the drydown cannot but appeal. Its sweet, intimate aspect evokes the scent of honey dribbled on skin. I am reminded of Baroness Moura Budberg, a Russian aristocrat who allegedly became a Soviet spy. Enigmatic to the end, she famously led an affair with the British spy R. H. Bruce Lockhart during the Revolution and later became the lover of both Maxim Gorky and H. G. Wells. Now Wells wasn't a pretty man, not attractive in any visual way. Moura’s own explanation for the unlikely liaison was that the attraction was sexual, even as she refused to marry him or remain faithful - "Wells’s skin", she said, "smelled of honey"...