Field Notes from Paris is the latest installment in the alphabetized line by San Francisco-based independent perfumer Ineke Rühland, a woody oriental inspired by her early days studying perfumery in Paris and at the Versailles, her strolls at le Marais and the fervour of trying to accumulate knowledge of her craft. The first four fragrances, alphabetized from A to D, came out in 2006. Two years later came Evening edged in Gold with its unusual candied and hypnotic Angel’s Trumpet floral note. And now the first scent to depart from the sharper flowers' schema into a more shadowy alley: Field Notes from Paris. The advertising slogan of "Life measured out in coffee spoons" recalls of course T.S Eliot and where else but in Paris, coffee capital of the world probably, would this hold any more true (romantically and not cynically so, I might add)? 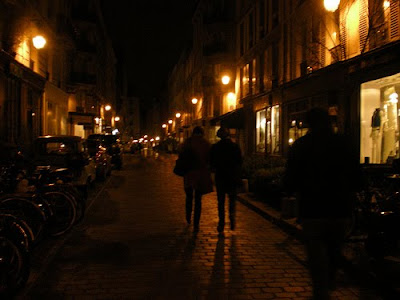 Ineke aimed to capture "the romantic, nostalgic feeling of sitting at a café and writing in a journal while lingering for hours over a cafe crème". I can just picture her starting her day sipping one at Au Petit Fer à Cheval on Rue Vielle du Temple on her route to book shopping at the nearby La Belle Hortense. And what better (and more standard accompaniment) to coffee than a puff of a cigarette, preferably the unfiltered ones which Parisians love to drag on still? It's no accident that F.Malle commissioned perfumer Carlos Benaïm with a home fragrance called "Coffee Society"!
Conversely to the retro cool ashtray note that several old-fashioned chypres convey with much flair (just think of Cellier's Bandit in Eau de Parfum), the tobacco featured in Field Notes from Paris is cuddlier and sweeter, unlit, devoid of its tough exteriors in an enigmaric warm and comforting embrace of a little smooth, aged patchouli and hay (but no coffee notes to speak of), but ~wait! is there a delicious whiff of leather, some honey and some lavender somewhere in there? The impression I am given is of a mellow masculine fougère, feathered out to its woodier extremities, especially in the opening which features the most interesting mentholated little wink. 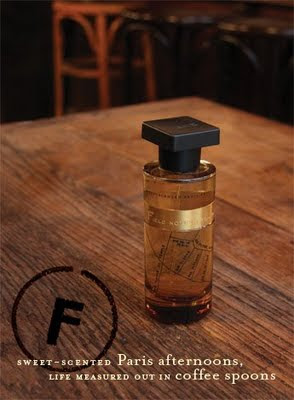 Judging by the retro fougère resurgence which we are experiencing in the niche sector lately (Geranium pour Monsieur, Fourreau Noir), I think Ineke is on to something; let's not forget how tobacco in perfumes is becoming the only acceptable way of getting your fix now, the launch of Havana Vanille and thevery densely tobacco-ish Bell'Antonio by Hilde Soliani other examples of the genre. Ineke's fingers are firmly on the pulse!
The finishing off in sweeter Virginian cedar (just a touch) and the rounding of lightly vanillic, resinous tones makes Field Notes from Paris wearable by both sexes, if so inclined, although women who usually go for smoother, more powdery vanillas in the woody oriental scheme (such as Trouble or Brit) and surypy thick ambers might have their expectations not met at all. The rest can breathe with relief; money well spent.

Field Notes from Paris is available in 75ml/2.5oz of Eau de Toilette for 88$ directly from the official Ineke site.
In the interests of disclosure I was sent a sample in a cute "matchbox" by the perfumer as part of a loyalty scheme.
Pics via anxietyneurosis.wordpress and pinksith.com
*Share with link: Sunday, November 01, 2009