The first scent opera is here!

"Most high-end perfumers spend months designing a signature scent they hope will stay on the market forever. Christophe Laudamiel, who wants to turn fragrance into high art, has labored for two years on 23 scents that will last for just half an hour. Mr. Laudamiel [..] is collaborating on a "scent opera," a new performance art that pairs music with a carefully orchestrated sequence of smells, some pleasant and some real stinkers. The opera, titled "Green Aria," will test the boundaries of scent art when it opens at the Guggenheim Museum in New York May 31." 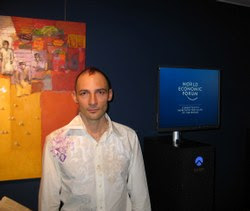 Icelandic composer Valgeir Sigurdsson collaborated with Nico Muhly to create music based on the scents, while Matthew Steward wrote the libretto and became the director. Alongside "earth" (moist and musky), "fire" (like campfire remnants on clothes), "crunchy green" (watery green thanks to cis-3-Hexenyl isobutyrate) and "magma" (tarry thanks to limbanol) expect to sniff such smells as vomit, feces, urine, rotten fish and burning trash (I actually have personal associations with burning trash and it's not always that vile; it depends on what trash you're burning I guess)

Alexandra Alter at online Wall Street Journal takes us into the creation of the first scent opera in an engaging article: a dream come true for the many sensorialists around who have always dreamt of a performance that would pair the visual and auditory with the olfactory! Ever since John Waters in the ultra-camp (and perversely very fun) odorama scratch n'sniff of Polyester (1981) popularised the idea, there has been the search for the perfect olfactory accompaniment to visual perfumances. Yet the critical issues of sensory overload (how are you supposed to clean the fog and start again?) and timing (not as easy as it sounds) have provided hurdles along the way. 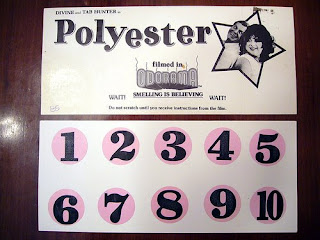 This time Fläkt Woods, a global ventilation company designed a box with pressurized steel canisters that will hold the scented crystals with the different odours because crystals produce more quickly evaporating scent than liquids or oils. (That's good to know when purchasing home fragrance acoutrements). In intervals, fresh air will be released from the special "microphones" so as to clear the nasal passages of the audience, preparing them from the next blast.

Christophe Laudamiel is no stranger to pairings of such a nature, being half of the duo who worked on the Thierry Mugler coffret that was inspired by the atmospherics of the best-selling novel Das Parfum by Patrick Suskind, subsequently filmed. In a no coinicidental string of affairs Thierry Mugler is sponsoring the new venture.

"In a darkened theater, audiences will be bombarded with smells, blasted in six-second sequences by a scent "microphone" attached to each seat. The scents tell the story of an epic struggle between nature and industry. Nearly five years in the making, the opera was conceived by Stewart Matthew, a corporate financier turned entrepreneur who co-founded Aeosphere, a "fragrance media" company, with Mr. Laudamiel in 2008."

Aeosphere opens its Manhattan office next month, while Laudamiel had been a tenant at the offices of Firmenich and a collaborating perfumer with IFF for quite a while.
A brave new world indeed!