Berries are an especially pliant fruity note in perfumes; no less because a certain group of synthetic musks has a berry undertone. The classic Mûre et Musc by L'Artisan Parfumeur paved the way in as early as 1978. The passionfruit focus of Escada's own Chiffon Sorbet didn't come out of the blue either: Guerlain's Nahéma (1978) brought a saturated fruity mantle to the central rose lending sonorous timbre. 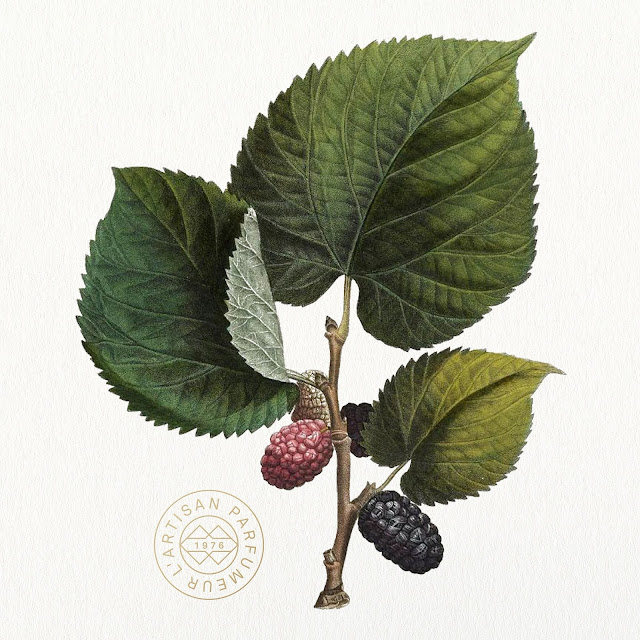 The idea for using this fruit in fragrance was conceived by Jean Laporte, the founder of the small niche brand of the pioneering group of artisan perfumers of the 1970s, L'Artisan Parfumeur. His little wonder of innovation from 1978, Mûre et Musc, still seduces its audience just as much over 40 years later. Discreet and gentle, Mûre et Musc was almost hippy-ish in its innocent naivety. The fresh tanginess of citrus (comprised of lemon, orange, and mandarin with a hint of spicy basil) complements the blackberry, enhancing the sweetish trail with a musky base note that lingers for a very long time on skin and on clothes.

Flanked with raspberry ketone, blackcurrant bud, and Galaxolide (a clean smelling musk), this structure would be simple, direct, innocent, sweetish, and tart in equal degrees, and captivating to those harboring the same memories in their heart of hearts! He succeeded with Mure et Musc, a huge cult phenomenon which gave rise to a constellation of berry musks that took the market by storm and formed the springboard for many young girls to jump into the realm of fine fragrance.

But why did it become so special in people's minds that even drugstores came to order their own blackberry-musk mix for their not-especially sophisticated clientele? "Its cottony-fruity notes that melt flawlessly to the skin. It's a close-to-the-skin perfume, which brings people in," to quote Jean-Claude Ellena who oversaw the commemorative editions that reprised the theme decades later for the, now owned by a conglomerate, L'Artisan Parfumeur. The original's cute innocence and come-hither subtlety still beguile the young at heart.