One is prepped for interesting things, since Roland Mouret was intent on commissioning a perfume collaboration to the maverick French firm of Etat Libre d'Orange for some time, eyeing creative director Etienne de Swardt as a fellow pioneer. 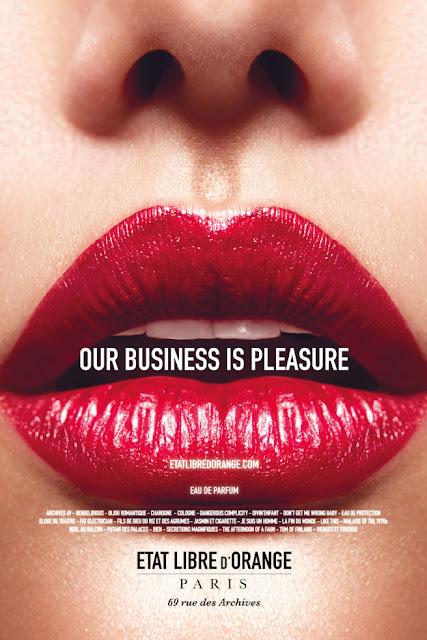 Mouret consolidated his fashion imprint through the arc of several designs of his divising: the Galaxy dress, the Moon, Pigalle, Titanium, and others following those. To paraphrase Christian Dior, each and every one of them appears coming out of his perfume named Une Amourette and composed by refined craftswoman Daniela Andrier Roche; best known for her Prada opus, Andrier settled upon an illusory and deceptive contraption. Designs and dresses like that might look like they could be made by anyone, but actually entail high skills and imaginative powers.

In Une Amourette the patchouli is rendered in the modern "cleaned up" style (less of the animalic darkness and more of the minty, camphorous quality) that makes for an excellent folding material for the pepper-leather axis from one angle and for the neroli-iris (which comes across as starchy-tart) axis from the other. The balance is precarious, yet in typical Andrier style the effect in Etat Libre d'Orange's Une Amourette Roland Mouret is sublimely modern; clean, powerful, rather masculine in a cornucopia of ersatz fruit salads & cotton candy vats in the feminine fragrances aisle. It's a rather weird scent, nonetheless, that truly deserves its place amongst the sophisticated line-up of the Etat Libre d'Orange collection.

A fairy tale without a dragon; only cerebral and sensuous enjoyment.