I'm starting with the really spectacular: We have a giveaway on Perfume Shrine, one winner will win TWO free perfume bottles of the newest creations by La Via del Profumo straight from Italy, one of Milano Caffé and one of Venezia Giardini Secreti (the first two fragrances in the new Italian Series). The draw is open to all till Wednesday 19th midnight and all you need to do is comment in the comment section below to be eligible. The winner will be announced on Thursday.

Now that we got this off our chest, let's concentrate on the gorgeous fragrances themselves! 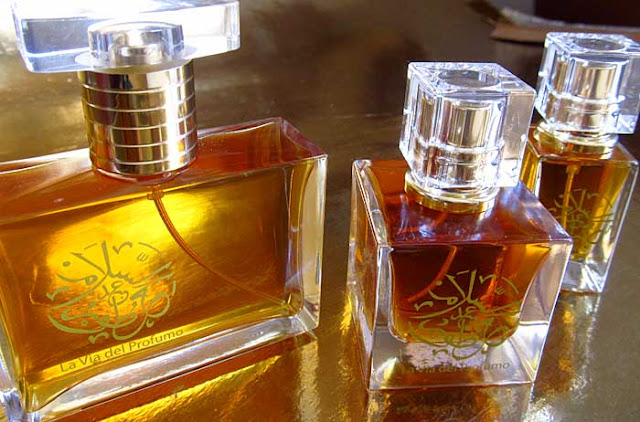 A sybarite fragrance needs the proper mind-frame to work and Italy with its languid climate and smooth contours of land naturally lends itself to it. The pervading and intoxicating scent of freshly ground coffee is one small part of this luxury of letting time slip by. The mingling of chocolate in the composition of Milano Caffé recalls the dusting of cocoa powder on the white "caplet" of a hearty and filling cappuccino, drunk leisurely with a view of the impressive Duomo before taking a stroll down the Via Montenapoleone for some serious window shopping. The Milanese are nothing if not sticklers for detail, from their dog's collar to their impeccable shoes, and I can feel in Milano Caffé the vibrancy of the elegant woody and spicy background which hums underneath the culinary notes of the top. Coffee is naturally a complex smell, comprised of caramelized & smoky/acrid facets on one end, of woody, like freshly sharpened pencils, on the other.


The dry quality of the fragrance despite the tonka bean and ambery richness elevates the composition into classic resinous-balsamic level; one mistakes smelling Milano Caffé for a full-bodied vintage that peels layer after layer after layer. In fact, what is most surprising is finding a hint of the cocoa-facet of orris and something which reminds me of the fluff, the flou quality of the resin opoponax, amidst the proceedings. This caress under the dark and bitterish flavor of coffee only serves to consolidate the infiltrating appeal of that highly prized bean, that elixir of life, the coffea arabica, cutting its slightly acidic character. Although the spicy woodiness might make Milano Caffé more conventionally masculine in direction, its richness and cuddly chocolate note makes it a great choice for the woman who doesn't follow trends but rather sets them herself. After all, it is no accident that coffee and coffee shops were seen as the nursery of revolution and of anarchy, and that both Ottoman Turkey in the 17th century and the Ethiopian church banned the exotic bean's secular consumption; it's that stimulating!

Venezia Giardini Secreti is inspired by the small "pockets" within Venice and the tales of the very popular in Italy Corto Maltese cartoon books, specifically "Favola di Venezia" ("Tale of Venice"). Venice is also the abode of Chevalier de Seingalt, more commonly known as the greatest womanizer of them all...

The solace of the shady gardens breeds flights of fancy and the escape of the intrigue of the political world: "When the Venetians are tired of the constituted authorities, they hid in these three secret places, these doors at the bottom of the secret passages opening to beautiful places and other stories ..." Whatever the story is, Venezia Giardini Secreti is redolent of the sweetly intoxicating scent of blooming jasmine and of rose blossoming in the summertime, allied to the mysticism and the marine signature of ambergris, an emblem of the naval tradition of "La Republicca Marinara".


In a way there is a kinship between Tawaf, La Via del Profumo's jasmine fragrance from the Arabian Series, which is redolent of the jasmine sambac variety, rich, heady, like an aching pleasure and a call of beauty, and the latest offering in the Italian Series. And yet in Venezia Giardini Segreti the direction veers into less of a resinous floriental, with the anchoring of the base providing the softest pungency, an animalic hint more than a mysterious, apocryphal rite. For all the secrecy of the passages under the canals—which lead to gardens of a hundred delights and of the erotically charged tales of Casanova—the elegance and grace of Venezia Giardini Segreti is manifested in a touch of soft leather, a hint of motherly milk, a whiff of salty sea ...