It's rare that perfumes correspond to their names, but Hedonist by newcomer Hungarian perfumer (taught at Grasse) Viktoria Minya is the exception to that rule. If Leos Carax's passionately controversial film Pola X was shot again, I'm sure one of the props used would be this fragrance: Not only for its glamorous, French-chateau-evoking  visual introduction that drips of old world class and physical luminosity, but also for its raw, emotionally honest, unassimilated sex scene following the hero's descent into bottomless soul searching. This dark obsession needs its own olfactory track.


Introducing a niche line has become an insurmountable task of difficulties by now: how to diverge and differentiate one's brand? It's less easy than it was in 2005 or so. Did I mention that creating a sexy fragrance is just as difficult? If not more? Well, it is. If you have followed perfume you know it's up there as desirable goal numero uno with manufacturers (not necessarily the people who love perfume, though!), but often the whole trial fails because, well, it doesn't work out. Imagine my surprise to find things that do work their magic. Not many but when they do.... ooh la la!!

There is already an interview with the photogenic Viktoria (who is a joy to communicate with) on Fragrantica, so what I wanted to add is just how EFFECTIVE her Hedonist is, in the sense mentioned above. In a previously anecdotal exchange between my significant other and myself, Ms. Minya's fragrance played a particularly decisive role. My man upon smelling it had a few ideas: "Let me see...smells a bit like coffee and honey, wait...that smells like the orange tobacco your cousin likes...some vanilla but not too much, eh? Tell me I'm right!" [My man is a perfumisto in the closet.] Myself I was sure this potent but ladylike potion had peachy-apricoty-citrusy nuances with lots of orange blossom rendered in an animalic fashion, lots of the voluptuousness of beeswax and yes, a super sexy feel! [No wonder he was aroused] I will spare you the carnal details to follow; I know Perfume Shrine's readers are possessive of a fertile imagination to rival Henry Melville's. 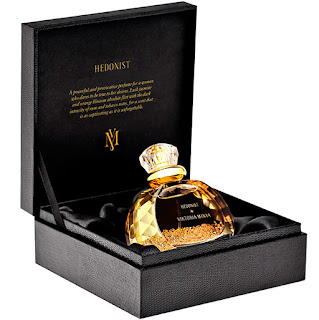 The handmade wooden box (with snakeskin leather look) opens to reveal a beautifully crafted bottle filled with hundreds of Bohemian crystals that sparkle in the champagne colored liquid, catching the light. I just wish that there were a way to own the perfume in perhaps a less glamorous presentation so as to cut down on the monetary overlay (195$/130€ for 45ml), but you can't blame a niche brand for wanting to stand out, can you?