Marilyn Monroe and the Unknown Perfume She Favored (Not the Chanel!)

Is there a single soul who hasn't heard the famous quip of Marilyn about wearing a few drops of Chanel No.5 in bed? I happen to know from reading biographies that she also kept a bottle of Joy perfume by Jean Patou, which is just as well. A recent Salvatore Ferragamo exhibition in Florence (Marilyn was an avid fan of the Italian shoemaker) alongside the 50th anniversary of Marilyn's tragic death in August 1962 revealed however an altogether unknown love for another perfume; quite different to the previous two, one which we wouldn't quite have pegged to Marilyn! Goes to show you how much we have made up our minds on how we view the iconic blonde... 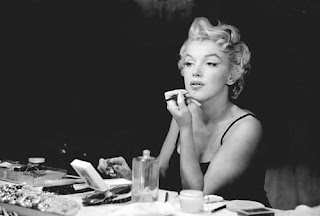 The evidence is rather conclusive (?)  A receipt from Floris on Jermyn Street in London during a dipping into the archives of the British brand -founded by Juan Famenias Floris of Spanish extraction in the early 19th century (1830 to be exact)- came up stating a purchase of six bottles of Floris Rose Geranium eau de toilette in 1959 under the alias of Miss Dorothy Blass, Monroe's personal secretary. Much as the name might mean nothing however, the bottles were to be sent to the Beverly Hills Hotel in Hollywood, California, where Marilyn Monroe stayed during the filming of one of her most celebrated films, Some Like it Hot. The hand-written "correction" striking out the Dorothy Blass name from the printed form to replace it with Marilyn Monroe Miller is telling. I don't know whether Floris is intent on resurrecting this fragrance based on this "leaked" info; if they did it might hint at other machinations behind it, but that remains to be seen.

Although quite different from the intimately sexy character of the Chanel (lots of sensuous musk and civet under the sweet jasmine and ylang ylang), Floris Rose Geranium does have some common thread with her other proclaimed love, Joy: the celebration of rose takes a quieter, more retro interplay with geranium (which is rosy in itself but somewhat more masculine than rose), sharp lemony citronella and the milkiness of sandalwood.

Perhaps it's just as well: Chanel got its most famous unsolicited endorsement through Marilyn (to the point that even rival brands today, such as Dior, try to gnaw on some of this Marilyn perfume legend) but the woman kept a secret as to her more private choice of fragrance, a tiny reflection of her inner maze. Or so it seems, at least for now.

Pic of Floris receipt via dailymail, pic of Marilyn putting on makeup via aranthasgourmetbeauty.com
*Share with link: Wednesday, July 11, 2012