There is an eerie feeling upon coming across a ghost town, the very cinematic experience of bypassing a highway into a smaller, abandonded scenic route into the vast countryside; all silence in the distance and blue skies passing you by above. In America ghost towns are something of a fixture in the collective unconscious, a remnant of the wild west past, the advent of industrialism and the building of autoroutes erasing bustling cities from the map.
The desolate beauty of the ruins, standing abandonded as if replete with tales of lives spent heard in whispers on the wind that blows amongst the delapidated buildings, inspired indie perfume Mandy Aftel (Aftelier perfumes) into creating an all-naturals perfume that would put decay into an elegant context, into a wearable form translating the ravages of time.


Sepia by Aftelier, the resulting perfume, utilizes the most refined and dignified of materials of sweet decay: oud wood mulling over floating ambergris; blanched, matured, patina-bearing, ghost-like...
The musty feel of both oud and cepes (the latter being the raw and damp smelling, peculiar essence of mushrooms, exalted in Mandy's Cepes and Tuberose) come out in the composition as seen through a sieve; their chunkier elements surfacing, while the rest is retreating into the distance like the vision of a ghost town while traversing through those abandonded roads of the west. Even though intense -typically gourmand, but not here!- notes such as cocoa, coffee and the multi-nuanced white tobacco are also featured in the formula, the weaving is tight, none of them peaking above the others. You'd be hard-pressed to distinguish one from the other. This dry woods perfume doesn't make any compromise.

Instead the floralcy of yellow mandarin along austere cedarwood and the musty notes open Sepia, predesposing someone for something strong which soon belies that impression: the fragrance becomes earthier, darker and more mysterious while continuously subtle. Aftel used other intriguing essences, such as pink lotus for a lighter feel, a hint of wine facet from berry notes, full bodied indolic jasmine and labdanum, usually the recipe for an animalic floral.

Sepia however defies such predictable seduction tricks. It is above all a play on atmosphere, an inwards  journey into what is left in our soul upon encountering a mirage, an illusion, a decaying thing of beauty. Is it there or is it not? And as such it is best savoured intellectually and with all our senses on the alert. 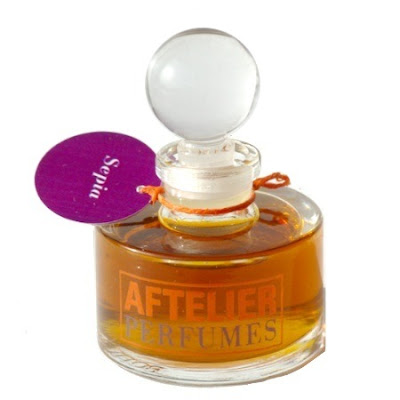