To say I am rather competent to judge a realistic fig or fig tree scent is an understatement, and that's not out of an overinflated ego. To reprise a popular olive oil commerical "I'm Greek, I should know!" Legion are the times I sought solace under the fig tree's thick shadows in the schorching summery heat; one of them under the very ruins of the Knossos palace in Crete. I can eat the fruit by the pound, such is the gluttony those taut little sacks inspire in me. And I have seen with my very archeologist's eyes how our ancestors consumed these nutritious gems by the pound too: the tiny seeds are still visible within the fossilised excrement fished out from the excavated sewage system at Akrotiri, on Santorini island. Oh yes, I know about figs and the tree that produces them all too well. 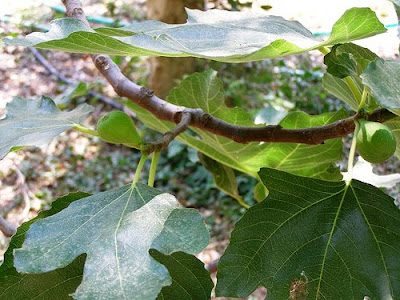 It comes as no surprise that I was taken by Sonoma Scent Studio's Fig Tree perfume. A fragrance that you should put on "Anytime you need a smile" as perfumer Laurie Erickson advises and on this freezing cold day of January there is no more proper time to remind myself of the paradise that our local nature is nurturing under this very cold, hard ground. The nascent roots sprouting little stems as we speak, the foliage in the trees now washed by the rain and shimmering under the "sun with teeth", awaiting to become fuzzy and dusty again with the gusts of July, the fruits waiting to appear again and again in their uninterrupted cycle of life.

Fig perfumes usually strive for one of two directions: there's the creamy-lactonic woody progeny started by perfumer Olivia Giacobetti with her Philosykos (Diptyque) and Premier Figuier (L'Artisan) where the nuances can veer over to apricots (a result of the peach lactone used); or the bitter, greener compositions such as Un Jardin en Mediterranée by Hermès and Jean Claude Ellena, based on stemone, a leafy oxime ~technically methyl-5 3-heptanone oxime~which generally imparts a powerfully fresh vibrancy to green florals (narcissus, lily of the valley), citruses (mandarin and grapefruit) and aids to built fig leaves and blackcurrant leaves notes.
Sonoma Scent Studio's Fig Tree is of the latter persuation; not that the natural milky-smelling coconut facet of the fig tree does not surface in the fragrance, a glimpse of the "milk" which the fruit oozes if you pinch it when semi-mature, but the emphasis by the perfumer has been deliberately given to the leaves, the unripe green sacks and the bark, through what seems like a synergy of cedar and patchouli.
Fig Tree is powerfully green in the beginning, with that unmistakeable fuzzy dustiness of the fig leaf; as if a very thin layer of earth is at all times resting on it, now matter how much you wash them. This raw effect ensures the realistic interpretation. But the unisex scent develops over time, seguing to a warm, delectable heart when the creamy notes appear (never too sweet, just on the brink of coconut milk), and then expressing a sustained woody-amber note, humming rather than hissing the lullaby of an eternal summer...

In the interests of disclosure, I was sent a sample directly by the perfumer.
photo of fig tree via greekresort blog
*Share with link: Tuesday, January 17, 2012