What Sells? A Case Study

An astounding number of articles tackles the latest, apparently unexpected ~from what I deduce, since it makes such an impression~ phenomenon: Namely that a "celeboscent" really made it. (This term is short for "celebrity scent"; those fragrances eponymously launched by stars, supposedly inspired by their personalities and lifestyle, but in fact churned out by perfume producing companies with minimal involvement by the stars themselves). Trusted reportage says that this particular frag is selling like crazy! What is it? It's Heat by Beyoncé Knowles! 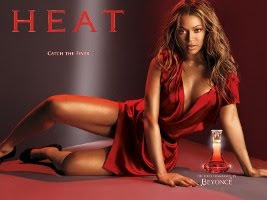 "At the recent Retail & Luxury Goods Conference at Harvard Business School, Macy’s CEO Terry Lundgren revealed that its already made more than $3 million in worldwide sales since its launch" [NB We're talking 3 months here] while he said that in an meet-and-greet with the singer herself "72,000 bottles of her perfume were sold that in that hour". To convert this in monetary values, Women's Wear Daily reported that first day Macy's sales made $60,000. (Talk about WOW!!) All to the point that "trying to pick up a bottle of “Heat” at Macy’s.com estimates over a month before it ships" now. "This morning I woke up and they told me the fragrance is the number one fragrance in America,” Beyoncé told Access. “I had absolutely no idea.” We're clearly talking about a huge commercial blockbuster. That made me think...

So the question arises: I am wondering whether the success has to do with the bootilicious sexy appeal of the singer herself (surely overall a positive role-model in today's celebrity world which is filled with human trash) or with the fragrance style and its perfect top-to-bottom design (corresponding so well to the celebrity herself, I mean, as celebrity brand expansion). Certainly it's not a "bootichouli" fragrance like we had suggested and hoped for on a previous occasion, at least going by the description, in which "Heat blends a floral mix of magnolias, neroli, and red vanilla orchids with the scent of almond macaroon, honeysuckle, nectar, and crème de musk" composed by perfumers Claude Dir and Olivier Gillotin. March on Perfume Posse observes that "Heat smells like a thin veneer of canned peaches in syrup over the most powerful, intensely animalic stank of unwashed ladyparts that I have ever smelled in a perfume, and I don’t mean that in a good way." Robin at NST on the other hand pegs it a warm fruity musk adding "I don’t find it even slightly sexy, and it isn’t what I’d call memorable, but it doesn’t much matter: it’s by Beyoncé and it isn’t a complete mess". Others report that real human testers (in Miami) perceive it as a cotton candy and amaretto fragrance. Take your pick!

Whatever it is, it's definitely a case-study for the heads at Coty (the perpetrator), Parlux et al. and for marketers everywhere. Expect more of the same very, very soon! And if fashion designers are "only worth as much as [their] latest collection's success", then celebrities will soon be worth the amount of their celebrity scent sales. Mark my words!
*Share with link: Wednesday, March 24, 2010