The Mystery of Egyptian Elixirs & The Story of Sacred Kyphi Perfume

Stakte, Susinum, Cyprinum, the Mendesian, Kyphi...Ancient Egyptians used various unguents, essences and aromatic fumigations as a means of well-being and communication with the divine or the dead. Such was the identification of Egypt with perfume production, despite other ancient civilizations dabbling in perfume making, that during Julius Caesar's Roman triumphs, alabastra (essence vials, the term being alabastron/αλάβαστρον in Greek due to the material used, alabaster) were tossed to the crowd to demonstrate his mastery over Egypt!
Although aromatic substances were abundant in Egypt, accesible even to humble labourers, manufactured pefume was a rare commodity reserved for sacred rites, the rich or for export. Images of lotuses being worn and sniffed pose an embarrasment of riches in ancient Egyptian iconography and yet this indigenous and common at the time blossom does not feature in perfume formulae. On the contrary, imports like myrrh, frankincense, cinnamon and cassia were favoured, suggesting that either the extraction methodology was lacking or that tastes ran to the exotic (much like now!) opting for the essences of Arabia Felix (happy Arabia). 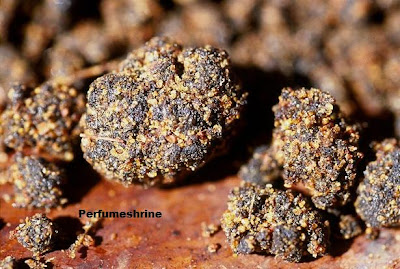 Sacred perfumes were forbidden to use by common folks. The infamous Kyphi (depicted above, recreated by Sandrine Videault) which is documented from Greek authors of antiquity ~indeed the word kyphi is Greek in itself~ such as Dioscorides, Plutarch (in Isis and Osiris) and Galen with slight variations is perhaps the best known. Unfortunately for us the Egyptian priest Manetho's treatise Preparation of Kyphi is lost. Recreations have been attempted by various perfumers, including Sandrine Videault (interviewed on these pages). But kyphi is not the only sacred one. 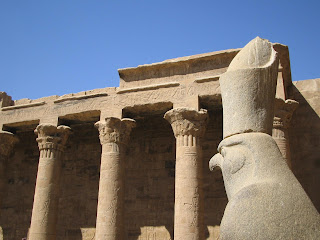 Another sacred perfume has been discovered by archeologists on the walls of the Ptolemaic temple of Edfu, in the valley of the Nile at Louxor. Based on styrax extract, it was reserved for assuaging the ancient deities of Egypt. The long preparation demanded at least 6 months for the ingredients to mature properly!

From all the forms of ancient Egyptian methods of aromatizing (fumigation, incense burning, pomade and fragranced oils) only one seems consistent with what we consider perfume today: aromatic perfume-oils. Vegetable oils were used as a carrier oil for the essences and two were favoured above all others by the ancient perfumers: balanos and ben. The reason was their naturally neutral odour which would minimally interfere with the final fragrance and the fact that they would keep fragrance longest. Balanos oil comes from the fruit of the Balanites aegyptiaca tree although nowadays no oil is commercially produced from it. Ben oil also circulated under the names moringa, behen, baq or horseradish tree oil (Moringa pterygosperma or M. aptera.) and was used in various therapeutic purposes as well.

The flacon containing perfume was as impotant then as it is now. Alabaster, according to Pliny, was the finest material for the safe-keeping of scent due to its non porous nature. Egyptian alabaster is a very fine grained variety of re-crystallized Eocene limestone (calcite,CaCO3) whereas in modern usage alabaster is a fine-grained, massive variety of gypsum (hydrated calcium sulfate, CaSO4.2H2O).
Varied perfume flacons have been excavated in large numbers. One of the most romantic excavations has been the Ulu Barun (at the Turkish coastline), a big galley loaded with fragant materials which dates to the time of Nefertiti. Chronologizing it was possible thanks to the fortunate discovery of a gold signet ring with Nefertiti's cartouche on it, which suggests a royal commission. Along with the fragrant materials, bars of blue glass were unintentionally designated to the depths. One could dreamingly hypothesize that the amazingly similar to modern aromatherapists' vials colour of the glass could be intended for perfume bottles, however no such evidence exists.

*It's interesting to note that although calamus is also referenced in the Bible (Exodus 30,23) as entering the composition of a sacred perfume for God made by Moses, it must be some other fragrant plant, as Moses was in the middle of the desert.

If you have an interest in ancient Egypt and the perfumes adorning its lifestyle, I highly recommend Lise Manniche's Sacred Luxuries: Fragrance, Aromatherapy and Cosmetics in Ancient Egypt, Cornell University Press, 1999 which contains actual ancient perfume recipes.