Melomakarona and Kourambiedes: the aromata of Greek Christmas holidays

The word άρωμα (aroma) means several things in Greek: It denotes personal fragrance as a medium of enhancing one's aura, it evokes the content of bottles encapsuling precious essences to be used for aromatizing of various aims, but also it means the lingering smell in the air that might be coming off a fragrant kitchen, busy in preparation for a traditional feast; a feast that is more of a gregarious social and sensuous event than merely a casual gathering. Food and the hearth have always been at the core of Greek culture (the hearth, Εστία, had been an ancient Greek goddess, no less) and savouring the aromata (plural for aroma) in every step of the process is half the fun!
The celebration of the end of the year, including Christmas and the New Year's Eve, is forever in my mind steeped in the sweet smells emanating through the door of an oven while baking the traditional and idiosyncratic cookies of the season: μελομακάρονα/melomakarona and κουραμπιέδες/kourambiedes. Although there are other delicacies around and everyone has to have something sweet on hand for the kid-carolers who come to the house on the morning of each celebration's Eve (caramelised nuts and raisins, marrons glacés and marrons déguisés in chocolate, candied orange rind, and δίπλες/"deeples" or "diples", that is Greek Honey Curls: pieces of fried and suryped dough sprinkled with chopped nuts, supposedly looking like Christ's swaddling clothes) it's those two mentioned above that are most popular and characteristic, found in every home from the most humble to the most extravagant.

So here are the recipes I use, handed down from my mother and grandmothers (excellent cooks all of them) for you to recreate the homely and sensuous atmosphere of this little corner of the world. They're easy to make and very flavourful! 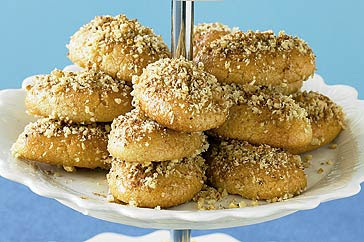 1.Preheat oven to 180°C/350°F/gas mark 4 and line 2 flat baking trays with baking paper.
2. Beat oil, sugar, 1/2 cup orange juice and 2 tablespoons lemon juice. You can do this by hand (I do) or use an electric mixer on high speed until thick and creamy.
3.Add egg yolk and beat again, but not too much this time (you want to trap in air so that it raises when baking).
4.Sift flour and add half the cinnamon and the clove to the oil mixture. Fold gently to combine (it should have a doughy texture).
5.Using your flour-dusted hands (so dough doesn't stick)hands, roll the mixture into oval shapes without pressing them too much. Dough should make about 32 pieces. Place on prepared trays without touching one another (as they will expand while baking).
6.Bake for 25 minutes or until firm to the touch and then allow to cool on trays.
7.To make the syrup combine all ingredients in a saucepan over medium to high heat, stirring to dissolve the sugar at first and bring to the boil. Then reduce heat to medium-low. Simmer for 4 minutes or until syrup thickens slightly: you want it to form "drops" when you pour it from a spoon.
8.Using a slotted spoon, dip the cool cookies, 1 at a time, into the hot syrup for about 30 seconds (no more or they become very sweet and sticky!), turning over until well coated. Return to trays. The cool cookie, hot suryp is the secret that makes them absorb the suryp best and thus remain delectably moist and soft.
9.Combine chopped walnuts and remaining ground cinnamon. Sprinkle over cookies: the suryp should make them mostly "stick" on top. Allow to cool completely and they're ready to serve.

Melomakarona are also called Φοινίκια (phoenekia), especially when they're shaped like fingers, in some regions of Greece (mainly where Greek refugees from the -now Turkish- Smyna and Constantinople came to). They keep for a long time (up to a month, although you're sure to consume them long before that!) outside of the fridge thanks to the high sugar ratio; just keep them in an air-tight biscuit box so they don't become dry due to air exposure.
Their clove-y smell is captured in a wonderfully indulgent little solid scent by Pacifica: Madagascar Spice. 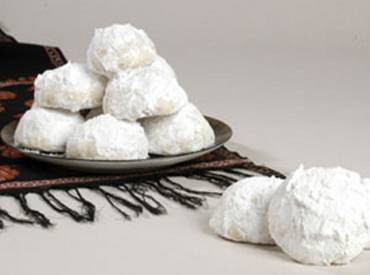 
Ingredients
4 cups of sheep's butter (cow's can be substituted, but the traditional method calls for sheep)
2 cups of confectioner's sugar
2 egg yolks
2 teaspoons of vanilla extract
2 teaspoons of baking powder
3 tablespoons of brandy liquor or ouzo (or orange juice, if you don't want to use alcohol)
1 cup of coarsely chopped roasted almonds
12 cups (1 1/2 kg or 3 1/3 lbs) of all-purpose flour
2 cups of confectioner's sugar (for dusting)
rose water or orange blossom water (about half a cup)

1.Preheat oven to 180°C/350°F/gas mark 4 and line 2 flat baking trays with baking paper.
2.Cream the butter (at room temperature) and sugar in a mixing bowl by hand, until white.
3.Dissolve the baking powder in the brandy/ouzo/orange juice and fold into the mixture, along with the egg yolks, vanilla, and almonds, one by one.
3.Gradually add flour without beating too much.
4.Knead the dough gently by hand until malleable. You don't want to let air escape, as it will contribute to making the cookies fluffy and soft.
5.Rolling the dough on flour-dusted hands (so it doesn't stick) roll the mixture into dome-shaped circles (thick like a pinkie finger). The dough should make about 50pieces. Place them on baking sheet without touching one another (as they will expand while baking).
6.Bake in preheated oven for 20 minutes or until cookies barely turn to golden brown. Get them out of the oven and allow to cool completely.
7.Sift confectioner's sugar onto a large tray or cookie sheet. As soon as the cookies are done, sprinkle them with the rose water or orange blossom water and dust them with the sugar. When all the cookies have been coated once, repeat (without sprinkling them in any liquid this time)cool.
8.Serve them in layers on a serving platter that has been dusted with sugar.

These buttery Greek Shortbread Cookies were also given in weddings and christenings once upon a time, because they look pure white, a symbol of new beginnings. They melt in the mouth and are very soft and fragile, so handle them gently!
Kourabiedes will keep for a couple of months thanks to the sugar if stored in an air-tight container. Make sure there's a dusting of powdered sugar on the bottom of the container, then layer cookies as above, each layer with a covering of sugar. Wait one day after baking to cover with an airtight lid, though.

If you're left with too much uncooked dough, you can wrap it well in plastic wrap, put in the freezer and it will keep for up to two months. When ready to use, remove and let the dough sit a while till malleable. Beat with the mixer briefly to aerate the dough ands you're ready to follow steps 5-8.

Pic of Melomakarona by Steve Brown via taste.com.au, pic of Kourambiedes via dianasdesserts.com
*Share with link: Tuesday, December 23, 2008