Musk and Civet in Food: Challenging our Perceptions

The seductive power of animalic essences in fragrances has been well known among people tuned into perfumes, especially of a vintage nature when true animalics were used in the formula. However how surprised would you be if you found out that not only your eau de toilette or extrait de parfum contained them, but also the delicacies that pass your lips? Yes, actual food and drink containing animalic essences such as musk or civet. 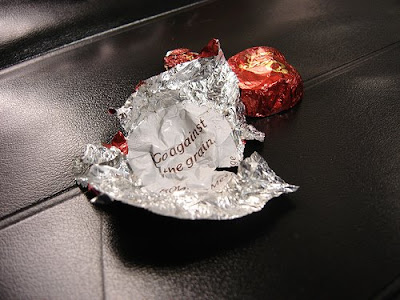 Musk was tentatively touched in one of the discussions I followed with some interest on a popular fragrance board the other day, as I had already experiences with the subject at hand: musk-flavoured candy, (called "musk candy" in Australia or "musk sticks" in other permutations) which seemed to create repulsion rather than attraction. Since everything in our medicine cabinet contains some form of synthesized musk (from soaps to cosmetics through bath oils and even the stuff we brush our teeth with!) and it's perenially a favourite of the functional fragrance industry to put in household cleansers, laundry detergents, and insect repellents, does it come as any surprise that artifically-flavoured food is also being aromatized with certain synthetic musk variants? Musk is an added component in fruit flavors, in chocolates, licorice, candies, chewing gum and even vanilla flavourings or puddings.
The cozy, inviting smell of musk which we associate with warm, living and heaving human skin has an illustrious ancenstry that can be traced back to the Silk Route. Legends touch upon the tales of Chinese concubines being fed natural* musk-flavoured food so that during lovemaking their skin would sweat pure essence acting as a powerful aphrodisiac. 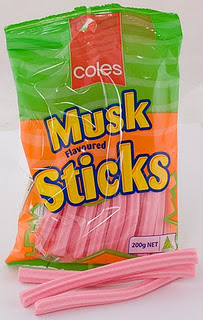 Is it any wonder then it has appeared even in a Lifesavers single flavour? That particular "musk candy" is an Australian idiosyncratic delicacy, much like Vegemite (the yeasty spread that rivals the British equivalent Marmite in the terrain of acquired taste). There also appears to be some form of edible Musk Sticks, by [supermarket private brand, as I learn from my Aussie readers] Coles, which appear to replicate the odour of incense sticks aromatized with musk. There is also the Beechies "musk gum" variety and Baba "musk melon candy". It's a whole industry!

Having been on the receiving end of a gift package that also entailed those "Musk Lifesavers", albeit of a different packaging (solid red with white lettering) and maker (not Nestle) than those linked above, sent by an Australian friend I can attest that soli-musk candies are not repulsive or nauseating. They're tinged with a "clean" soapy lace of almost aldehydic aftertaste that is certainly strange to encounter in a hard candy but which once you try you can appreciate for what it is. 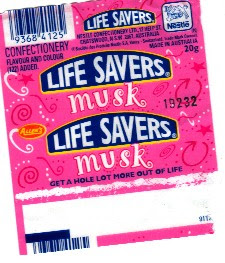 Perhaps coming from a culture that traditionally and continuously has indulged in odours and flavours such as turpentine (the undertone of some ouzo varieties), of anise and mastic (used in several local liquors but also neat in bread and dough products), of cumin (an essential component of meatballs and pasturma) and of garlic (too numerous recipes to mention) along with an experimental spirit in cuisine that embraces squids, kalamari, octupus and snails cooked in red wine in all their squishy glory, as well as ripe cheeses that have mould, these come as no big surprise to me. And my musk affinities firmly in place, accounting for collecting musk fragrances of every possible nuance from the opalescent to the fetid, you might be warned that your own experience might be different. Still, it is an interesting proposition and worth keeping in mind should you find yourself faced with the option of tasting for yourself.

And what about civet in recipes, that fecal-smelling aroma that derives from the anal glands of the civet cat, farmed in Ethiopia and small erratic groups in other exotic locales at the moment? Civet highly diluted in fragrance formulae can have a marvellous effect of opening the bouquet, especially of floral blends, and thus adding texture, depth and radiance. An animalic touch that cannot be pinpointed as fecal as it truly is in concentration, yet is unmistakeably there: if you need proof open a vintage flacon of Jicky extrait de parfum and wait for it to make its pronounced magic appearence. 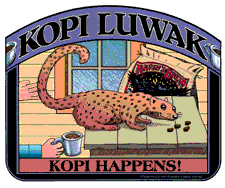 Although civet essence is not as wondrously diversified in synthesized forms as that of musk because the extraction of civet aromatic essence does not entail killing the animal ~and therefore has not had the chance to enter our plates in comparable droves~ civet does make an infamous appearence in drink: in coffee. This very special and most expensive coffee (£100 - £300 per lb. at time of writing), named Kopi Luwak, is produced by feeding the civet cats coffee berries which cannot be digested along with their food (much like we'd naturally dispose the bran of whole-grain cereals) and waiting for them to come out the natural way. The passing through the anal region stimulates the production of the anal glands secreting the valuable civet essence that is so prized in perfumery, so the beans gain a whole new dimension of animalic aroma. Further treating by roasting produces a coffee brew that is said to be among the very best, good to the last dropping so to speak. I admit although I have been intrigued by the idea for years and searching high and low for it locally among batches of Jamaican Blue Mountain and other assorted exclusive imports, it was only by the powers of the Internet and the intervention of a penpal that I came upon this link. I think I will take the plunge, bypassing the raw product we're invited to clean and roast ourselves, rather opting for a generous pouch. If on the other hand civet cats are too exotic for you, there is also weasel coffee - made from berries which have been regurgitated by, you guessed it, weasels.

And for those wondering, castoreum is also featured as a flavouring, in chewing gum and cigarettes no less, but its restricted use of the natural essence has probably put a stop to the practice. As to ambergris/grey amber, the divine marine/brine-like essence coming from the expulged cuttlefish residue in the digestive track of sperm whales, found floating in the ocean, I would be standing in line to taste something aromatized with its refined aroma. Brillat-Savarin recommended an infusion called "chocolate ambre" which was essentially chocolate drink heavily aromatized with ambregris. Heaven...


*The natural musk essence comes from Moschus moschiferus moschiferus or musk deer from the Himalayas but the cruelty necessitated for extracting the musk pouch from its genital region resulting in killing the animal has effected a prohibition on its hunting. Today musk essences at almost 100% are produced synthetically.

Pic Against the Grain by thatotherguy/flickr. Cartoon of civet coffee production spoof provided by Concord on MUA.

Related reading on Perfume Shrine: The Musk Series (everything about the musk note, natural or synthetic, its cultural aspirations, its various musky fragrance types on the market)