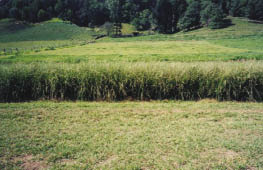 Vetiver is one of those materials of perfumery that has a particularly interesting background, not least because of its exotic lineage from the Indian peninsula and the fact that the aromatic substance is derived from its rhizomes, making fragrances focused on it a sort of soliradix (in accordance to the term soliflore for fragrances focusing on one flower). Its stems are tall and the leaves are long, thin and rather rigid, while the flowers are brownish purple, but the aroma comes from the roots much like another fascinating material: iris!
Perhaps the most charming, intelligent and arresting characteristic of vetiver though is its ability to thus absorb the very essence of the soil it's been growing into, giving a vetiver adventurer a tour of exotic locales at the sniff of its deep, inviting breath.

Vetiver (Chrysopogon zizanioides) is technically a perennial grass of the Poaceae family native to India. The name vetiver/vettiveru comes from Tamil, in which vetti means cut and veru means root. In western and Northern India, it is more commonly known as khus, which resulted in the English names cuscus, cuss cuss, kuss-kuss grass, etc. In perfumery we often see the older French spelling vetyver used.

Often vetiver grass is referred to as an engineer's or architect's wet dream because of its ability grow up to 1.5 meters high and form clumps as wide, but unlike most grasses (which form horizontally spreading mat-like root systems), vetiver's roots grow downward up to 2-4 meters in depth making it an excellent tool in controling erosion; useful in both agriculture (rice paddies) and terrestrial management (stream banks), especially in tropical climates suffering from monsoons.

Vetiver is closely related to other fragrant grasses such as Lemon Grass (Cymbopogon citratus), citronella (Cymbopogon nardus, C. winterianus) and Palmarosa (Cymbopogon martinii), which is in some respect the reason why it is sometimes considered a leafy/green or woody note, despite it being an earthy/rooty substance.
The world's major producers include Haiti, India, Java, and Réunion. However each soil plays a subtle part in influencing the smell of the oil yielded, so it is an interesting exercise to get hold of different batches and comparing. Some varieties are earthy or smokey, such as the Indian or Javenese batches. These can have a slightly yeasty touch that might take some getting used to. Others are more traditionally woody, with none of the earthy smell we usually associate with vetiver (especially the Sri Lankan variety). And a couple are even considered "green", such as the Haitian Vetiver which has a cleaner, grassier (pine needles) to the edge of citrusy and lightly floral (rosy geranium); same with the oil from Réunion. Both of these are considered of superior quality to the Javanese. China, Brazil and Japan also produce vetiver aromatic products, but I haven't been able to sample those, nevertheless I am determined to do so in the future.
There is also a special variety produced in the north of India which is termed khus/ruh khus or khas and is distilled from wild-growing vetiver. It is untypically blueish green in shade due to its being distilled in copper cauldrons, the traditional way. The oxidation lends a metallic aroma besides the colour, making it unique. Considered superior to the oil obtained from the cultivated variety, it is unfortunately seldom found outside of India, because most of it is consumed within the country.

The essential oil of vetiver produced is darkish brown and rather thick, viscuous. Smelling vetiver oil you are faced with a deep, earthy, herbaceous and balsamic odour which has smokey and sweet nuances with a dark chocolatey edge to it.
Vetiver can be used to render a woody, earthy tone to flowers providing depth, tenacity and "opening" of their bouquet but it can also be used to admirable results in chypres for its herbaceous/earthy vibe (especially now that oakmoss use has been lowered), in orientals for its interesting balsamic-chocolatey nuances and in incenses or citrus colognes to provide a counterpoint of woodiness.
It's so intense on its own that vetiver compositions are usually solo arrangements, rather than full symphonies, which explains why so often Vetiver fragrances are called with one part of their name just that. Like Luca Turin pointed out, comparing it to the treatment of cacao in culinary explorations:

"The perfumer has two options: retreat and declare victory, i.e. add a touch of lavender and call the result Vetiver (black chocolate); Or earn his keep and compose full-score for bass clarinet and orchestra (Milka with nuts and raisins)".

The production of the vetiver oil goes like this:
The best quality oil is obtained from roots that are 18 to 24 months old. The rhizomes are dug up and cleaned, then dried. Before the distillation, the roots are chopped and soaked in water awaiting for the distillation, a procedure that takes 18 to 24 hours. Afterwards the distillate separates into the essential oil and hydrosol, the oil is skimmed off and allowed to age for a few months to allow some undesirable notes which form during the distillation to dissipate. The yield is high making vetiver an economic building block, which explains its popularity in fragrance making. Additionally, the fact that nothing smells like the real thing yet, assures us of its continued popularity versus aromachemical alternatives for the time being; no mean feat in our times. Like patchouli and sandalwood essential oils, vetiver greatly matures with aging, becoming less yeasty-musty and more pleasantly balsamic, becoming a fascinating note.

Vetiver's exciting history and representation in perfumery will be the subject of the third part in our Vetiver Series.