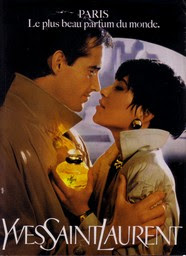 In a funny little tale recounted to perfume journalist Susan Irvine, the notorious Russian perfumer Sophia Grojsman was followed by a drunk one night, forcing her to walk quicker in the night streets, upon which he called out: "Hey lady, I am not following you; I am just trying to smell your perfume!" Grojsman was working on Paris, the big, ebullient rose fragrance by Yves Saint Laurent, at the time, and this was the moment she realised "she had it". Indeed Paris has the gift -and curse, if you overdo it, as so many did in the late 80s- to be perceptible at a distance, creating a wake that will make waiters swerve on their heels, small children drop their toys to hug you and men exclaiming you smell "clean and feminine".

Yves Saint Laurent, an incurable romantic, created Paris in 1983 choosing rose and pink as the themes around which the fragrance would be built and dedicated it to his beloved city of inspiration and eternal love. A strange, arguably atavistic choice for someone who had caused an uproar a mere 6 years back with his contraband alluding fragrance of artificial paradises, Opium.
The fragrance is a romantic symphony, a sonorous orchestration of reportedly 232 notes blended with the artistry of someone who knows what they are doing. Like a lavish bouquet, Paris’ deepening chords of rose petal notes make the fragrance all the richer in its expression of lush warmth and womanly tenderness.

The fragrance formula actually follows quite closely the 1947 french classic L'Air du Temps (Nina Ricci) but the violet-rose fruity accord of Paris is based on ionones and damascones, aroma materials first discovered in 1893 (ionones) and isolated in 1967 (damascones); they were first used in abundance in another rose fragrance, the fiery Nahéma by Guerlain. Damascones featured heavily in the legendary Nombre Noir and contributed along with ionones to many of the formidable "roaring rose" fragrances of the 1980s. Violets naturally smell of ionones, with equal parts woody and fruity undertones, which makes them such an interesting material for the perfumer.
In Paris the rose is never just rosy: it takes all complex shades and nuances of a living room in which they decorate a flamboyant vase. Honeyed overtones of sweet, ripe fruits as well as liquor whiffs, as of dregs left in small taillé glasses after a hearty dinner, are clearly perceptible in different stages of the development. The whole embraces you in a vice-grip which asserts itself as only very affectionate feminine relatives can be: there is no escape, but you truly know they mean well.

Paris took a more daring turn visually during Tom Ford's tenure which resulted in this racy image for the European glossies. The advertisements, in tune with current designer Stefano Pilati's fashions, have -since Ford's departure from the house- reverted to tamer connotations.

Paris eau de toilette , which is more powdery and "cleaner", has a deep pink cap, while the sweeter eau de parfum has a golden cap and is fruitier. The pure parfum, intensely rosy and potent, is crowned with a prismatic cap in the shape of a reverted cone-exposing brilliant, symbolising Paris, the City of Light; designed by Pierre Dinard according to Basenotes or Alain de Morgues according to Susan Irvine.

Limited editions of versions of the original Paris for the warmer season include: Paris Eau de Printemps (2002), Paris Premieres Roses (2003), Paris Roses des Bois (2004), Paris Roses Enchantees (2005), Paris Roses des Vergers (2006), and Paris Jardins Romantiques (2007), some of which are grouped in a collectible set of minis. Typically they are lighter, girlier and less dense, highlighting a woodier, greener or muskier accord instead.

Clip of Paris commercial uploaded by tylw on Youtube. Pic of ad from parfumdepub.
*Share with link: Thursday, June 05, 2008