There are perfumes that know what they are doing and there are perfumes on an identity crisis. The latest Chloé belongs to the latter category. You're probably asking yourselves "the latest? Isn't there only one Chloé"? No, actually there are three of them simply named Chloé! Confusing, isn't it? Let's help make the disctinctions.

Michael Edwards lists five Chloé fragrances in total in his compendium: Chloé Narcisse, Chloé Innocence, Chloé Classic (presumambly the original by Karl Lagerfeld: a white floral),Chloé (Collection 2005), and one just called Chloé listed among rosy fragrances (therefore the newest one, out February 2008). The first two are easy to distinguish, the rest not as much.
But let's take matters at the top.

Jacques Lenoir and Gaby Aghion were the designers responsible for the prêt-a-porter fashion house Chloé, founded in 1952. The fashions focused on a romantic vein inspired by the art which had been prompted by the bucolic idyll of antiquity by Longus, Daphnis and Chloe. The dreamy ballet Daphnis et Chloé

And so in 1975, when Karl Lagerfeld was designing for them before going on to Chanel, the house came out with its own perfume, simply named Chloé by Chloé 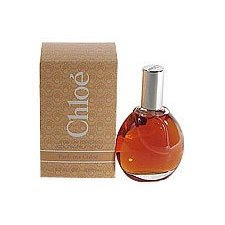 Taking its name from the Greek, which means "green shoot" it was composed by Betty Busse. The original Chloé married the subtle green tinge of leaves and aldehydic peach on top of an avalanche of jasmine, ylang-ylang, honeysuckle and narcissus, with just a whisper of exotic coconut. The drydown of warm skin and a little dry orris powder was indeed memorable. Thus it managed to mark an era, becoming a cult item, none the less because of its weird award-winning bottle designed by Joe Messina which was depicting the stem of a calla lily on the extrait de parfum stopper. It could also be interpreted as an aorta sprouting from a heart, if one is twisted enough...

Although the original Chloé has had many ardent fans through the years I always found that warm, radiant and feminine through it undoubtedly is, it possessed a tad sticky vulgarity that announced its wearer a bit earlier than would be the height of good manners: when within an arm's length, that is! Rumours have been circulating about a reformulation in the 1990s that left something to be desired for those who were devoted to the scent of their youth.
Compared to other tuberose vignettes,the original Chloé is an amateur 9mm to Carnal Flower's 3D-Techicolor and it lacks the rubber gloves of kink that Fracas is hiding beneath its femme façade. Nevertheless it executed its message with conviction and admirable flair. 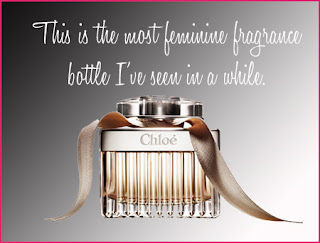 The new version after 10 years of seeming inertia, alas, does not; and on top of that it marks the discontinuation of the old, classic tuberosey Chloé. The press release by Coty promised:

"The amber floral by Michel Almairac and Amandine Marie at Robertet is meant to embody the classic modern scent. It features a bouquet of powdered florals composed of peony, lychée and freesia. Notes of rose, magnolia and lily of the valley make up the heart over an amber and cedar wood base".

Personally I would not categorise the new Chloé in the ambery floral family. In fact it starts with an hydroponic* freesia accord that reminded me of the intense aqueous opening of L'eau d'Issey as well as its fantasy woody base. The pastel fruit-jelly accord (of which lychee is officially mentioned) has a passing resemblance to the fruity floral character of Cool Water Woman. Bearing in mind that those two are fragrances which I have smelled to death in the 90s, I could do without. There is also no prominent rosiness, at least no next of kin to the noble Bulgarian attars and the whole expires in little saccharine puffs of no great consequence. The attention which had been given to the exquisite, hefty bottle showing love for the detail (the grosgrain ribbon) was sadly lacking in the production of the jus.

No less than three egeries front the new Chloé campaign: American cult icon Chloë Sevigny, model Anja Rubik and French actress Clemence Poesy — "each chosen to represent a different facet of the Chloé woman: romantic; edgy, and sexy and sensual" — they all star in the black & white ad campaign, which you can watch here.

It is especially interesting to note that Chloë Sevigny, notorious for her outré performance in the Brown Bunny by Vincent Gallo is from now on and for as long as her contract is valid forbidden to star in comparable projects that might harm the reputation of the fragrance and consequently its sales. "It's very flattering," said Sevigny on being picked to represent Chloé Eau de Parfum, before adding, with a laugh, "I'm concerned that the customers might be confused, though; I have the umlaut in my name while they have the accent. I'm Chloë, not Chloé."
I was also surprised by her comment that Chloé has an edible quality about it in the above clip: I certainly didn't detect anything of the sort!
No wonder Chandler Burr slain the new fragrance in his article in The New York Times.

There is yet a third Chloé fragrance that might be confused with both, usually referred to on etailers as Chloé collection 2005, from the year it launched (it was a spring edition). The info from Parfumessence states that it features

"top notes of water lily, passionfruit, and pear, with a heart of tuberose & gardenia over a base of white woods and musk".

I haven't tried it but it is worth bearing in mind, should one be before a counter on which the sales assistant is not completely in tune to the goings-on in the house of Chloé . And why would she?


{*Hydroponics is a method of growing plants using mineral nutrient solutions instead of soil}.

Pic of ad through Threadtrend.com, of original bottle through Amazon, of new bottle through Glam.com and of collection 2005 through Parfumessence.
*Share with link: Monday, March 10, 2008