The Case of the Jolie-Laide Madame ~Jolie Madame by Balmain: fragrance review 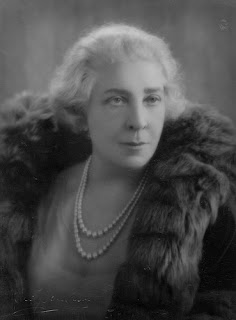 "A writer should write with his eyes and a painter paint with his ears".

It is perhaps fitting that a review of Jolie Madame, the leathery fragrance by Germain Cellier created for couturier Pierre Balmain in 1953 should start with a quote by one of his famous clients who graced this perfume with her preference over others* [*actually this last bit isn't conclusive as Stein died in 1946 as pointed out by our readers, assuming the fragrance was originally created in 1953, and not before, for her own use].
Like Stein herself, Jolie Madame bypasses jolie (=pretty) for stunning and makes you experience it with other senses than the designated one.

I personally remember first smelling it from an almost empty little bottle of parfum on my grandmother’s dresser: a woman who had a way with poetry as well and spoke no less than 7 languages.

On meeting Stein, Alice B.Toklas, her longtime companion and her Paris confidante, wrote:

“She was a golden brown presence, burned by the Tuscan sun and with a golden glint in her warm brown hair. She was dressed in a warm brown corduroy suit. She wore a large round coral brooch and when she talked, very little, or laughed, a good deal, I thought her voice came from this brooch. It was unlike anyone else's voice--deep, full, velvety, like a great contralto's, like two voices”.

It is this sound coming in a stream of conciousness as I think of the sonorous merging of violets and leather that is at the verdant core of Jolie Madame: two voices, the pitch of a deep contralto.
Cellier was an iconoclast working with essences and concepts that were rejected by other perfumers because they weren’t au goût du jour: her hyperbole of galbanum dosage in the vintage Vent Vert (a Balmain creation that trully is the antipode of everything Jolie Madame stands for), the assertion of isobutyl quinoline rendering the leathery note in Bandit, the rubbery nuances of tuberose in Fracas that has an almost trigeminal effect to our brain.

Directly inspired by her previous work in Bandit and to a lesser degree in Fracas, Cellier set out to create something for Balmain that would smother leather with an unexpected accord: the duskiness and powderiness of violet.
Violet has an old-fashioned, Victorian connotation, because historically that was the zenith of their popularity. Violets also have a reputation of an aphrodisiac effect, albeit a tempered one. And for that reason they have been featured in pastilles as well as other edible treats. However the surprising fact is that it was the sweet, powdery flowers which were prized then, whereas it is the greener-smelling leaves which are now used in commercial perfumery. As the floral absolute is labour intensive and therefore prohibitedly expensive the recreation of a violet accord is composed with 2,6-nonadienal, beta-ionone, dihydro-beta-ionone and alpha-ionone in addition to other elements.

Jolie Madame marries violet with the ingredient which lends Bandit its harsh, demonic character: quinoline. But whereas Bandit is un parfum figuratif, trying to give the rendition of quinoline’s acid pungency, Jolie Madame is not as much. Instead alongside violets it takes some elements of the gardenia chypres that were popular at the times, yet pushing the envelope all the way. Lots of the chypres in that genre began as a mossy composition embracing a heart of gardenia rendered by styrallyl acetate, a substance naturally found in gardenia buds. Featured in Ma Griffe, which was at the time considered the pre-eminent debutante fragrance, as well as in Miss Dior, it bestows its feminine, oily fattiness to the proceedings attracting women who still kept a little girl hiding someplace in their hearts. Leather scents, on the other hand, whether they were strictly adhering to the chypre structure or not, were not as well-received and popular in a time of traditional values and fashion sense (the 1950s) as the gardenia chypres.

Jolie Madame therefore took a risk: a calculated one, given Balmain’s fashion apotheosis in that decade in the halcyon days of Paris fashion dominance, but still a dare. It was unapologetically the scent of a woman, not a debutante, and it mirrored Stein’s words who claimed Paris was her hometown as much as America was her country:

“…in our American life where there is no coercion in custom and it is our right to change our vocation so often as we have desire and opportunity, it is a common experience that our youth extends through the whole first twenty-nine years of our life and it is not till we reach thirty that we find at last that vocation for which we feel ourselves fit and to which we willingly devote continued labor”. 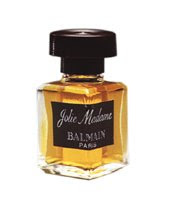 Indeed, much as I try, I would find some difficulty in gifting a very young woman with the wonder that is Jolie Madame. The acrid opening of artemisia that vibrates at an emerald frequency is otherworldly and trully awesome. It has a passing resemblance to the minty top of Halston, a scent that came two decades later, at the time of the resurgence of emancipated chypres.
Less strident than brigant Bandit, not as dry as Chanel’s Cuir de Russie but with a more animalic streak running into alleys of deep castoreum and womanly civet, Jolie Madame opens up to reveal a vista of patchouli and moss-laden powdered hides. Its roguish leatheriness stays on throughout, lasting exeptionally well even in the modern eau de toilette. To reference Luca Turin, everything in Jolie Madame is mature, powdery, evolved.

On that note it bears mentioning that the reformulations have not been tremendously respectful to the original and in fact there have been at least two of those: one occuring about 3 years ago and one in the late 90s. I can’t profess an opinion on the most recent edition other than I have heard it described as more aldehydic and with a more pronounced iris heart while trully different than the version which I enjoy; the latter is deeply mossy and leathery, uninhibited rather than demure.
The lighter-coloured version comes in the rectangular bottle with grey label surfacing on many online stores. The vintage is coloured like fine thyme honey and encased in a bottle as the one depicted.