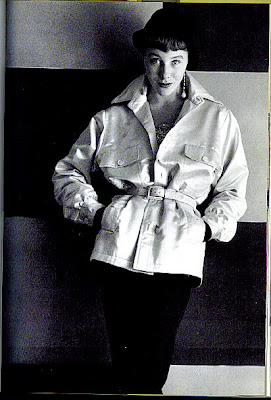 The day I finally smelled the peach in Mitsouko – a full-fleshed downy peach bulging through the seamless composition – was the day after I smelled the mythical Iris Gris, by Jacques Fath. As though the latter had opened up an unknown dimension in the former: the same peach note, known as undecalactone or aldehyde C-14 (though it technically isn’t an aldehyde), pushing itself through once I had grounds for comparison.

Thanks to Luca Turin’s The Secret of Scent, I knew both fragrances shared the note. His few lines on the tragically rare Iris Gris, the best iris ever in his opinion, had spurred my curiosity. But I didn’t hold much hope of smelling it outside the Versailles Osmothèque: each, rare flacon seemed to go for astronomical price… The French couturier Jacques Fath launched it in 1947: but he died at 43, in 1954, and though Fath perfumes continued to be produced, the expensive Iris Gris was soon discontinued: hence its extreme rarity.

No hope at all, that is, until I happened on an open-air flea market right next to my place, under the aerial metro that runs past the Eiffel tower. Somehow, that Saturday, I knew there was a perfume waiting there for me. Eyes peeled, I wandered from stall to stall, thought I spotted old flacons, was quickly disappointed when the seller told me they weren’t perfume… And nearly fainted when she did point me towards a table where she had a couple.

It was sitting there. Iris Gris. No more than 1/5 evaporated, sealed, with box. Impeccable colour. Reasonable price for what it fetches in auctions. I didn’t haggle, and stole away with my prize, mind reeling. I knew I’d gotten hold of a myth. 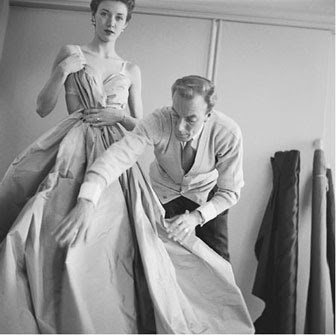 The great unsealing took place in a café right by the Palais-Royal, with perfumer and perfume historian Octavian Sever Coifan. He was the man I needed for the occasion: he’d smelled the Osmothèque reproduction and could vouch for its condition (authenticity was never in doubt, because of the intact seal).

It is impeccable. Fresh as the day it was composed, which Octavian explained to me was due to the fact that it certainly didn’t have any hesperidic top notes: those are the ones that spoil in vintage perfume.
But what jumped out immediately was the peach. As smooth and downy cheeked as a Renoir model’s, sweet without being tooth-aching syrupy.

Octavian held out blotters of orris absolute, irone (the molecule that makes iris smell of iris: the higher the concentration, the higher price the orris fetches) and ionones (the violet smell) for comparison.

And magically, iris came to the fore. Its slight metallic tinge softened by the peach, but definitely iris – and iris with a smile. 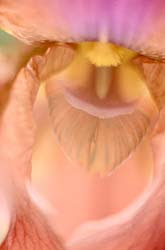 Now every time I picked up the blotter, I got either peach or iris. A bit like in those 3-D postcards we used to have as children: tilt it one way, and you get the peach. Tilt it the other way, and it morphs into the iris. If there are other notes (and there are in Octavian’s detailed breakdown), I just couldn’t pick them up. It’s that seamlessly blended: like a “gorge de pigeon” (pigeon-throat) taffetas – a comparison Luca Turin uses in The Secret of Scent ~the iris-peach combination is woven into the very fabric of the scent. Then as the fragrance evolves, the iris-peach weaves somehow tightens and melds into a single, smooth and utterly unique scent: a joyful iris, a fleshed-out iris as light-hearted as an aldehydic, but without the “old-fashioned” feel that some people get out of aldehydic scents because of their classic status, or that “hairspray” smell that comes from hairspray actually being scented to resemble the likes of Chanel N°5.

The overall effect is amazingly modern and spare: it could’ve been composed yesterday and it could be reissued with great success tomorrow, and walk rings around Kelly Calèche (which I admire, by the way). Unlike some vintage scents that feel very much of their time and need a special frame of mind to get into – much as a vintage dress does – this feels as young and joyful as the day it was composed.

Jacques Fath was indeed one of the first couturiers to think of very young women in his fresh and sophisticated designs: of course, young women of the time were quite a bit more sophisticated than they would be in the following decade. With his matinee-idol good looks, the designer to Hollywood stars (he designed Rita Hayworth’s wedding dress) was very much a star in his own right, as famous in his time as Christian Dior whose New Look he interpreted in a more supple, playful manner. A gifted colourist, he was said to favour amethyst and grey – which may have partly been the inspiration for Iris Gris…


The scent itself was composed by Vincent Roubert, who authored the classic leather fragrance Knize Ten in 1924, as well several Coty fragances, including the best-selling floral aldehydic L’Aimant in 1927 (which was thought to be Coty’s answer to Chanel N°5), but also the masculine Fath Green Water (1927), still produced but with a very different formula.

The house of Fath has recently revived its clothing line with designer Lizzie Disney at the helm. Here’s hoping they reissue the original Iris Gris, without tweaking the formula at all. In the meantime, I’ll be enjoying every drop with the tight throat that comes from releasing a long-imprisoned genie from its bottle, knowing it’ll never come back…