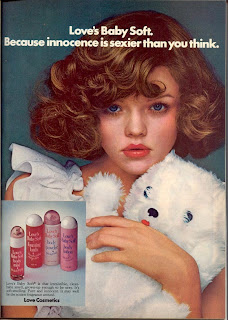 Love is in the air and the perennial question on what constitutes a romantically attractive fragrance and just how scents are perceived by the opposite sex.
The February 08 issue of Allure comes to the rescue, centering on fragrance and romance, as is usual in publications when St.Valentine's is around the corner. An article by Judy Bachrach, titled "Romance in a bottle", draws interesting opinions on the subject from famous people; two of which happen to be perfumers themselves: Sophia Grojsman and Chris Sheldrake. Their replies were so...what is the word I am searching for...that they merited their own commentary. Today we focus on the former.

I have never put great faith in the method via which Sophia Grojsman approaches femininity in perfume. I admit it in all honesty. Her creations from the bombastically pervading Tresor and the equally potent Eternity, to the luminous Paris, on to the oriental jam of Jaipur are so intense and extroverted sides of femininity that they register as caricatures in my mind: accentuating the characteristic traits that differentiate male from female in our perceived consious: The lush rose, the velvety peach, the intense floral sweetness...

Therefore when she suggests using baby-powder-smelling fragrances before jumping into bed (assuming it is with someone other than just your humble self!)as a nod to our subconsious limbic memory of getting our bottoms puffed with the stuff as babies and presumably associating the feeling of being loved and cared for with the aroma of baby powder, I am going a little "huh?"
First of all, because although this exact association is indeed tender but potentially anti-climatic in an amorous occassion (unless...let's not go there!). And secondly, because it has me wondering about how powder, and specifically baby powder registers in the mind of people in general and whether Grojsman is aware of this.

One of the most common complaints in the perfume arena of online discussion and reviewing boards, such as the hugely popular one in MakeupAlley, is that something smells of baby powder ~or baby wipes and similar products in general; clean ones it is assumed, mind you. The perceived image is uniformely unsexy. Still, there is a sinister trail of thought that goes into work here.

There is concern among some women who do have babies that it connotates tasks that remind them of burdening responsibilities and a period in their life when they felt unattractive. Therefore they would not associate those moments with a sexy afterthought. Understandable.

There is also the more sinister syllogism that babies and infants are off limits sexually (not that I disagree, of course), therefore finding an aroma associated with babies sexy is reminiscent of perverted pedophiles. Now being seen as a perverted pedophile -even in the context of merely favourite smells- is a stigma. You want to avoid that by all means.
This train of thought however takes one thing as a foregone conclusion: that perfume is first and foremost supposed to be sexually attractive and thus seen only in a sexually mature context (which is why lots of people object to kids donning fragrance). Ergo, if perfume is to be taken seriously, it must not smell of babies, or it is "sick".

To that opinion one might radically disagree, especially if one has a keen interest in olfaction in general.
And this is also one of the great divides between American and European sensibilities, as European advertisements do not hesitate to present talcum-scented products in appealing ways that suggest some tinge of sensuous allure. Whether that has to do with widespread pedophile circuits and infantilism, well...let's not go there. A can of worms that can't be opened with impunity.
Suffice to say that for Americans the baby powder connotation is smelling of Johnson & Johnson's citrusy, lightly floral vanilla, while for Europeans it is the orage blossom-and-light-musk of Mustela and Nenuco, as evidenced by the experience of Jean Claude Ellena.

However in typical paranoia and irony some baby powdery scents have proven to be huge bestsellers, eclipsing other scents that launched tagged as sexy. Examples of talcum-laced scents are Flower by Kenzo or Cashmere Mist by Donna Karan. Others have proclaimed their baby pedigree unashamedly, like Petits et Mamans by Bvlgari. And still some have become cult classics with their vat-of-talc odour, like Teint de Neige and Keiko Mecheri's Loukhoum. The choice is yours...

What is your opinion on this subject? I would be interested in reading your comments on this.