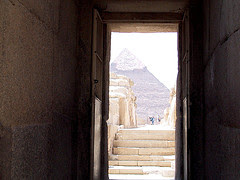 Lore has shaped the imagination of many in reference to the secrets of the Great Pyramid of Egypt: hidden passages, curses cast upon intruders, mystical symbols and astronomical calculations far ahead of their times. More Sphinx-like than the actual Sphinx, the Great Pyramid still holds some of its secrets to this day.

Djedi by Guerlain ,"the driest perfume of all time" according to Roja Dove and the "tremendous animalic vetiver" for Luca Turin, is an analogous example in perfumery. And it takes its name after an ancient Egyptian magician related to the Great Pyramid. It is as magical, as soulful and as strange a perfume as entering an ancient burial place hidden behind rocks in a far away desert.
But you might need magical powers to have a bottle procured; or very deep pockets…Or better yet a dear friend like mrs.Kern who is so amazingly generous and kind that she sent me a little of her own.

Herodotus, the Greek historian, had visited Giza in about 450 BC, where he was told by Egyptian priests that the Great Pyramid had been built for the pharaoh Khufu (Cheops to the Greeks) second god-king of the Fourth Dynasty (c.2575–c. 2465 BC). It weighed 6 million tons, the weight of all Europe's cathedrals put together and it was the tallest building in the world up till the start of the 14th century AD.
Khufu and the Magician is a tale of Egyptian magic which appears in the Westcar Papyrus (Second Intermediate Period - around 1500 BC), housed in the Berlin Museum.
Pharaoh Khufu's sons are amusing their father by telling tales of magic:

“Djedi is a man of one hundred and ten years~the tale went. Every day he eats five hundred loaves of bread, a haunch of ox is his meat, and he drinks one hundred jugs of beer as well. He knows how to reattach a severed head and how to make a lion follow him with its leash on the ground. And he knows the number of secret chambers in Thoth's temple."

Khufu orders his son to bring the magician and then a prisoner brought, to lop off his head and see Djedi's magic in action. But the magician protests that he could not sacrifice humans for his magic. So a goose is brought on which Djedi could perform his magic on. The morale of the story is transparent: some things are just too sacred to be trifled with.

Khufu had wished Djedi to fashion his mausoleum under his guidance, but to no avail. In the words of Zahi Hawass, upon excavating the pyramid, courtesy of guardian.net:

“I never thought we would find anything behind the door discovered 64 metres inside the south shaft of the Great Pyramid in 1993 by Rudolf Gantenbrink . […]But when we used the ultrasonic equipment and learnt that the thickness of the door was only 6cm, I said that this was a surprise and there must be something there. […] We sent the robot into the second shaft, and as it traveled through we could see […] it stopped in front of another door with two copper handles: Some believe these doors have a symbolic meaning because it is written on the Pyramid Text that the Pharaoh must travel through a series of doors to reach the Netherworld. […] I would like to suggest that these doors hide Khufu's real burial chamber. […]
About 900 years after the reign of Khufu we have a story called "Khufu and the Magician". Djedi knew everything about the secret chambers of Thoth, but he did not reveal the secret. I therefore believe that the burial chambers were hidden behind these doors”.

The perfume itself is a strange and perfume-y mineral affair of dry leather and ambery, animalic decomposition that almost defies description. Its opening is jolting, disturbing, the weirdest thing; yet it beckons you to continue smelling till the end of the prolonged journey into the night. There is deep grief manifesting itself through bitter herbs, artemisia-like, and copious amounts of earthy vetiver with cold air which reminds one of the strange feelings upon first trying Messe de Minuit by Etro. Those elements fan out into feminine, yet dusty, almost musty rose and a powdery base. This is no opulent rose for a bourgeois eager to show off her wealth or powdery sweetness for an aristocrat who wants to keep her man in difficult times. This is a regal lament for the loss of a favourite son, perhaps lost forever in the cold waters of the battle of Salamis or the trenches of the World War I, no matter; this grief transcends cultures.
Pungent leather with its slightly sour edge and powdery musk act like whalebone does to underpinnings, supporting, exuding an image of bravery and humaness at the same time.
This is unmistakenly Guerlain, unmistakebly animalic with a rather fecal warmth at the end, exuding the grandeur of another, elegant era. Reminding me of my grandmother who had her clothes tailored in Paris and her jewels made in Smyrna and who always smelled ravishingly opulent.

Although its strange, intense greeness and dryness have a passing relation to the classic Bandit eau de parfum, the closest to it that I have smelled is Vero Profumo’s Onda; although the latter is a tad warmer and sexier with its catty whiff and coriander/mace spiciness. However, while Onda has a certain modernity that puts it firmly into the realm of a contemporary piece of art, Djedi is stylistically a product of its time and recalls an era that is past us. 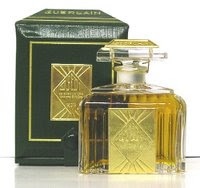 Djedi was created in 1926 by Jacques Guerlain and re-issued in 1996 for only 1000 bottles. Today the vintage is extremely rare and goes for astronomical prices rivaling the mathematical achievements etched on the pyramid walls itself. The re-issue, using the formula of yore, is also quite rare and costly.

But it lets one glimpse one into the abyss and back. If one dares…

Pic of Great pyramid by inderstadt/flickr. Painting "And there was a great cry in Egypt" by Arthur Hacker courtesy of art.com. Bottle of Djedi courtesy of Guerlain