Everyone has an aunt that used to bathe in cold water regardless of it being winter or summer, slip on her bathing suit first thing in the morning and go for an invogorating swim on the first sign of warm weather in mid-spring. She wore long masculine white shirts for summer errands and shopping for gigantic prawns for lunch; often without anything else beneath them but her already salty swimsuit and with matching white plimsolls on her slim feet. She left the salt from the sea on her skin all day long till the evening bath to tone it, make it firmer and washed her hair with rain water ~when she could get it. Those tips were divulged to you in passing: laughter and joyous munching on summery peaches, juice dribbling down her jaw while she was solving crosswords at the veranda; long legs sprawled over another chair, her metallic-frame reading glasses on her long nose. And “what is the word that is both a machine and a mystery? Has 6 letters”. You scratched your little head for it, for it was your favourite aunt. She had never married and people wondered if she had any boyfriends. Did she? You never got to know until it was too late. Her cold bathing didn’t help along with her illness, of which she got alerted rather too late. All the joyfull memorabilia of those summers long ago came into your mind with a frenzying velocity to overwhelm you. And what tears you wept… She could have been wearing Diorella all those summers ago. It wasn’t important; she never showed any signs of self-indulgence and perfume might seem like one.

But her scent could be Diorella. It was in 1972 when this chypre came out. Composed from a rather short formula by Edmond Roudnitska, it came as a female counterpart to his extremely successful Eau Sauvage: the masculine cologne that proved to be the most shared scent between the sexes in the 20th century. The heads at Dior soon saw that women who grabbed this magnificent, vivacious specimen from their boyfriends’ bathrooms would want a comparable fragrance to claim their own. And so Diorella was born exactly 6 years later, smelling as fresh as tomorrow. Roudnitska said about Diorella that it was his proudest creation and that it was the perfect compliment to the environment around his house and garden; he interestingly also said that it derived from Roudnitska's previous 1953 Eau Fraîche, not Eau Sauvage. In Diorella he summarised all the good refined things about spartan style he had come to master in his box of tricks. Rather, he had dispensed with the tricks by now and focused on pure, unadulterated essence. 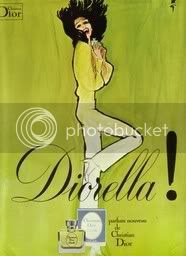 Despite the joyful character of Diorella’s herbal opening (echoing the aromatic top of basil and bergamot of Eau Sauvage) and the zing of snapped leaves from a lemon tree that might remind you of O de Lancome (1969), Diorella is more serious than that. I also smell a touch of galbanum, a strong green note that was mainly explored in Germaine Cellier’s Vent Vert for Balmain (much more evident in the vintage version than the reformulated one by Calice Becker) which gives another layer of verdancy. And there is a touch of mandarin it seems (or is it?) with a synthetic melon accord to further consolidate the idea that was fist explored in Le Parfum de Thèrese; an iconoclastic idea at the time, giving an aqueous feel.

There is again the familiar theme of peach that Roudnitska explored in both Rochas Femme and Diorella, but here it is done in such a ligh manner as to not blunt the axe into fruit confits. Its subtle warmth enrobs a fresh jasmine note (probably the same dihydrojasmonate/ hedione isolated from the absolute that he used in Eau Sauvage). There is a magical translucence to it like sipping cold tangy juice from a crystal glass on a hot day. A very subtle sweetness reminds one of honeysuckle vines climbing on a metal fence, as if smelled from a distance. Later on there is a little powdery mossy ambience that slowly suggests a more autumnal mood, a secret that contrasts with the dazzling hesperides and fruits of the beginning. To every dawn there is twilight and those notes provide the backdrop to it. Maybe that was what prompted Susan Irvine to proclaim of it:


And “what is the word that is both a machine and a mystery? Has 6 letters”. You scratched your little head for it, for it was your favourite aunt. She had never married and people wondered if she had any boyfriends. Did she? The word, dear aunt, was enigma. You.


Diorella is available at most department stores carrying Dior perfumes. It only comes in eau de toilette and there are no major differences between different vintages to my knowledge.


Next post will tackle a fun side of Dior!