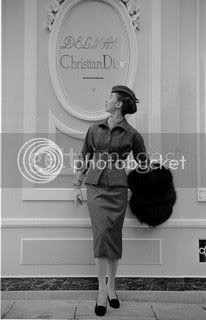 Previously on this series we mentioned briefly that chypres have apparently fallen out of favour in late years, with the exception of the very new "modern" ones discussed. And we pointed out that this is due to the differentiation in ingredients listed, but it must be accounted to something else as well.
After all Jacques Polge attempted to create a new breed of chypre without oakmoss in his 31 rue Cambon for Chanel Les Exclusifs, using a novel accord of iris and pepper. We could mention in passing that this had been reported by dr.Luca Turin a long time ago and I seriously doubt that had it not (and consequently heavily discussed) most people would accurately discern the nuances of those exact two notes. Because yes, 31 rue Cambon is very well-crafted and it seams a textured veil of soie sauvage that is quite different than the orientalised brocade of Coromandel or the chiffons of the rest of Les Exclusifs. One or two of course might profer the opinion that it is not as revolutionary as lauded in its final result, which is what matters most to the wearer anyway, but that would divert us from the point of today's article.

The matter is that chypres (and 31 rue Cambon among them, hence the inclusion) smell very different than the rest of the fragrant families. This is definitely a matter of aesthetics which might attract or repel anyone who tentatively opens this Pandora's box of perfumers' temperas; colours which they love to use, abuse and even distort to create nuanced recreations of abstract pictures that do not resemble anything in particular. If floral perfumes try to catch in some greater or lesser degree a glimpse of fragrant bouquets unfurling and fields in bloom, if citrus perfumes evoke the first bright days of summer and the joys of downing a frozen glass of sparkly, tangy liquid and if orientals make us visualise opulent maharanhis in their palaces adorned with heavy jewels and burning aromatic resins, chypres do not aim to offer a visual subtext to their message. Although they usually get described as mossy, earthy, deep and often damp -like the forest floor of an autumnal day- it is equally valid to note that they offer a smooth result in which none of the seperate notes raises itself in a high-pitched falsetto voice over the others, but they all work in a choral unison of unprecedented discipline and beauty. The notes blurr and blead into each other like watercolours on the canvas. But their finalised effect is usually not very much in tune with watercolours in their feel. They are more solid, substantial, offering great depth and dimension much like the oils on a J.M.W.Turner naval depiction. You feel the smoothness and sumptuousness of them as you apply them on your skin and this is their characteristic that accounts for profound and deep-seated love or hate towards them among perfume wearers.

Chypres also project a level of confidence in themselves. In this regard they share this quality with several orientals; but whereas orientals have a foot in Freudian notions of childhood attachements, since this is a category that is using elements that recall memories of comfort and nourishement (especially in recent years with the emergence of the subcategory of parfums gourmands) such as vanilla and culinary spices, chypres project a more cerebral attitude. They are frequently viewed as extremely sophisticated, whereas orientals might not be as much, and their wearer is often seen as a specimen of womanhood who would partake of The Financial Times on a regular basis. At least this is what the dominant perception is among the general and not so general public.
As Julia Muller in The Haarman & Reimer Book of Perfume notes:


"These perfume users {chypre users} view themselves as being harmonious, well-balanced individuals, who rarely have unhappy or depressive moods. All in all, they are satisfied with themselves and with their lives. They are realistic in their thinking and put less stock in their luck and more in their own deeds."

Perfume consultants attribute those characteristics to a group they term "Extrovert and emotionally stable", which if one dabbles in such things is represented by a special quadrant in the psychological test for perfume choosing known as the Colour Rosette Test.
According to Leffinwell (click here):

"In the color rosette test, the test subject selects from seven different color combinations the one that she likes best. If she chooses more than one rosette, she is asked to pick which of the two appeals most to her. A woman who picks the color combination of yellow, orange, red and pale green, for example, is not only extraverted, active, optimistic and positive – she’ll also tend to prefer fresh floral fragrance notes. Women with a preference for subdued, pastel-like hues like purple or colors like blue-black and mauve, on the other hand, tend to be introverted and pensive. They are likely to want Oriental scents. On the other hand, if the test subject has an equal preference for two color rosettes, she finds perfume creations interesting that unite both corresponding types of fragrances".


If nothing more, this generalisation is fun to peruse and might reveal some hidden aspects of psychology that might or might not bear any relevance to our psyche. There is even a section devoted to men!
For the full test click here.

There is also a more superficial element nevertheless to chypres and their perceived message. Often the very french word chic surfaces in conversations among people into perfume when discussing chypres. Perfume Shrine had discussed the concept of chic in perfumery previously and you can access the article clicking here. As you can see, chypres feature prominently in that notion, exactly because of their manufactured character that does not try to mimic nature but rather to interpret it through the lens of an intelligent human mind.
Sartorial choices therefore follow suit (and there is a pun in this!):

"In their desired lifestyle, these women do not have any interest in keeping up with fashion, in all of its varied manifestations. They love to look well cared for, and their clothing must always be suited to the occasion. In all matters, especially in the case of clothing, they display a pronounced sense of quality. Basically, there are not many very young women in this group of perfume users.”

Those elements discussed above might hold the secret to why recent years have been the tombstone on chypres. In a world revolving around air-headed celebrities who cannot read a book of chick-lit, let alone The Financial Times and in which low rise jeans stoop to down there revealing crass G-strings with fake Swarovski rhinestones, the attributes of classic chypre perfumes seem almost alien. And therefore shunned in favour of more complacent concoctions that might take shelf space at your local Sephora from those illustrious chypres of yore.

Stay tuned for a Titan of a legend reviewed in the upcoming posts and for analysis on the chronology of chypres in relation to the zeitgeist!
Pic of maison Dior courtesy of gettyimages, pic of Colour Rosette from Leffinwell
*Share with link: Friday, October 05, 2007