Suck it, you bitch! 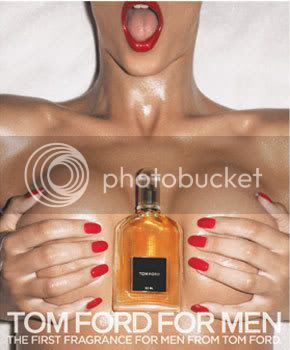 Regular Perfume Shriners will be a little shocked by this undoubtedly vulgar display of bold title and accompanying advertising image, but not really surprised as they have come to expect some scathing commentary on fragrance advertising on numerous occassions in the past, recent and not so recent (Click here for part1, part2, part3, part4, part5).
So the news is mr.Ford is issuing a masculine sidekick to his Black Orchid for women scent this season called Tom Ford for Men and the advertising comprises the image above.

I know, I know...It is no secret that mr.Ford has been playing the "sex sells" card again. This is the only adage he has been exploiting for quite some time now. In fact as long as I can remember his pretty mug entering my consciousness. Mr.Ford had been exploiting a subtler aproach while at Yves Saint Laurent, although one would be hard pressed not to admit that it somehow clashed with the extraordinarily chic facade of the venerable house, a fact that brought him into direct confrontation with mr. Saint Laurent himself (the latter with genuine Gallic nonchalance selling his House and retiring, thus admiting there is little chic in today's designing world).

And yet one cannot find major fault with the images of the advertisements for Yves Saint Laurent perfumes while mr.Ford was in charge. From the infamous print ad for the masculine M7 which depicts an uncircumsized hairy male in all his nude glory (click here for a pic) to the daring suggestion of a menage a trois in the Paris ads ~which for a nano-second made me look upon this fragrance with quite a different eye (shame on me!)~, his stint at Saint Laurent was characterised by an aesthetic that was bold, daring but rather tasteful albeit in a Hollywood-sort-of-way. 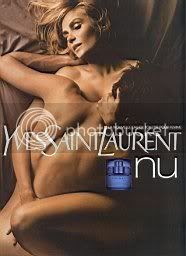 The porcelain nude skin of Sophie Dahl for Opium stands among the most memorable ones and this one for Nu eau de toilette featuring director Roman Polanski's wife, french actress Emmanuelle Seigner, from 2003 is among the ones I personally find quite alluring. Of course Emmanuelle Seigner does have the heavy features that denote some sort of vulgar carnality that helps make her compelling despite her lack of serious talent in such films as Bitter Moon and The Ninth Gate. Still, the entanglement of bodies in amorous embrace in the print ad captures my fancy and makes me dream a little.
Which is not what the new ad for Tom Ford for Men does. And not for prudish reasons either. 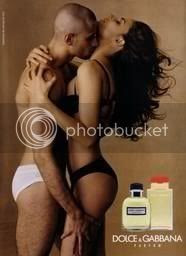 Amorous couples in passionate embrace have always been at the heart of perfume advertising, since seduction we are led to believe is at the core of perfume wearing. Of course this is not always so and perfume lovers who appreciate perfume as an art form would have serious disagreement with this; however from a mass market point of view ~which marketeers aim at in the first place anyway~ this is true. Dolce & Gabanna accomplished this admirably in a series of advertising images that encompass both taste and passion and of which the accompanying image is my personal favourite. 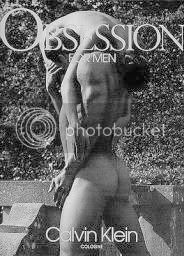 It seems to me that mr.Ford has taken the place of sexual provocateur that Calvin Klein used to be in the 1980s, although with a much more agressive stance and ~dare I say it?~ less modesty and self-constraint. The above might seem ironic for someone who built a reputation for racy ads such as this one for his scent Obsession in 1988.
Simply put, the current ad for Tom Ford for Men lacks taste. But what is even more interesting is that it also lacks sexiness. That elusive quality that an image which possesses it makes you look, look away and then look again with renewed interest, much like a really intriguing woman on the street would have you double-checking instead of ogling at her openly displayed attributes. The supposedly orgasmic O of the red lips as a signal of availability, the distorted shape of the breasts with the talons painted in red holding them tight for a titty-fuck, the dominance of male over female in a position that reminds one of a porn flick: all these things debase the previous aesthetic of Ford efforts into the realm of the basest shock value attempts at capturing the interest of people by getting banned from major magazines. And this is coming from someone who wouldn't venture into what he is showing everyone else, due to his own sexual preferences. So, is this choice a deliberate attempt at a new form of exclusivity? In accordance to his Private Line of perfumes which supposesdly target a more daring audience? This is something for mr.Ford to answer and we can only speculate. I am trembling at the thought of what he might conceive next! 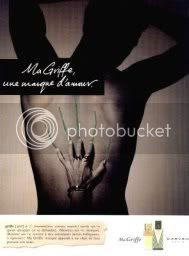 For the purpose of aimless exercise and because there is such a thing as collective memory, let's witness some sexy advertsing images that do not usually get mentioned. The following two are for the classic scent Ma Griffe(=my talon/my signature), 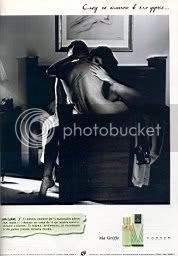 proving that older advertsing isn't necessarily less sexy or daring and the other one is from Lacoste pour homme which depicts a fetching specimen with a Y chromosome aimed at the discerning women that account for more than 70% of the sales of men's scents anyway. 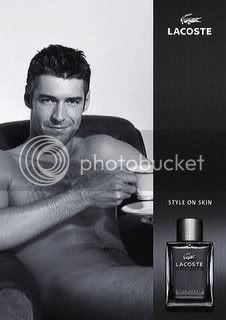 But I guess mr.Ford missed that little factoid. On the other hand, as he is indeed a brilliant marketeer (as attested by his success so far) he might be privy to some information of greater magnitude, so I am keeping my mouth shut on more comments for now. Which is more than I can say for the woman in the ad! 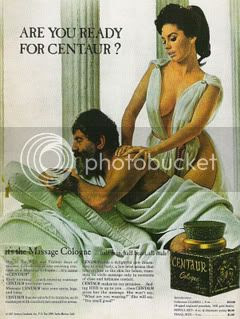 Last but not least, he could have gone for the highly camp effect which would have earned him humorous brownie points, such as this one for Centaur Cologne. There, that's so much better!