It wouldn't be inaccurate to claim that Sì, the latest feminine fragrance by Giorgio Armani, is L'Oreal's (the parent company of Armani parfums) answer to the commercial success of Lancôme's La Vie Est Belle from the previous year. Both are competent but rather forgettable perfumes that are sure to capture and retain the demographic they're aimed at: 35-50 year old women seeking something a little more sophisticated than the average fruity floral at department stores, while still not shocking anyone with their limp-wristed, yet persistent, wake of scent.

They're the Empire State Building rather than the strikingly asymmetrical Reykjavík’s Harpa Concert Hall & Conference Center. The tousled hair rom-com heroine rather than Irene Dunne. And a predictably lyrical novel that reads like a self-help book by Paulo Coelho rather than Orhan Pamuk. No, strike the last aphorism out: the fragrances in question are not Coelho-bad, surely! 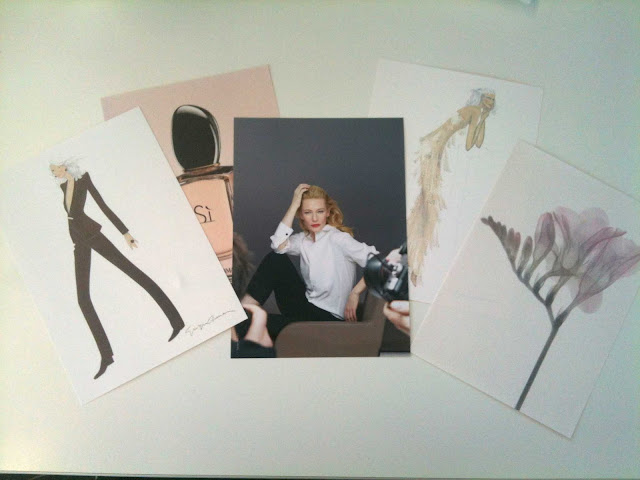 Several small details point to the correlation between the two scents, Sì and La vie est belle. I mean.
The blackcurrant top note revisits a theme that was forgotten for long (First by Van Cleef & Arpels brought it into the scene and it's famously giving the piquancy in niche cult L'Ombre Dans l'Eau by Diptyque). They share a small fruity lactonic chapter (reminiscent of peach and pear). They both are buttressed by the familiar contemporary patchouli with woody-smelling Iso E Super and musks, plus a cotton candy vanilla note that -especially in the Lancome fragrance- instantly references Angel to anyone's mind. In Sì, the feel of a nouveau chypre (see our article for more on those) is enhanced by a cosmetics-smelling chord that is feminine and subtly intimate: the rosy note is simply put buoyed by soft, powdery violets like in many lipsticks and face powders.
Giorgio Armani's Sì is less sweet overall, with a drier, less cushion-like ambience. The cleaned-up feel and powdery abstraction recall segments of Knowing, a forgotten 1980s perfume by Estée Lauder. As per the perfumer, Christine Nagel of Mane, the base of Armani Sì includes Orcanox, which is another name for Ambroxan or Ambrofix (an aromachemical with an abstract woody-ambery scent aiming to recall natural ambergris), that gives great diffusion and tenacity to modern fragrances; indeed this Armani is one of them.

The choice of actress extraordinaire Cate Blanchett as the fronting woman for Armani's latest fragrance ("Cate Blanchett says Sì" -i.e. "yes" in Italian- is the motto of the campaign) has created the expectation of something truly exceptional and smart, like she is herself -the modern equivalent of Katherine Hepburn. Maybe the stakes were just too high. Sì just couldn't possibly live up to it or the "chypre reinvented" perfumista-nod on top of this. That doesn't mean it's not a pleasant fragrance; you could do much worse in the department store circuit, I'd wager.
Lovely bottle (in 1, 1.7 and 3.4oz of eau de parfum at major department stores), reminiscent of the Armani Privé perfume bottles aesthetic, a nice bonus.

Below, watch the official film for Giorgio Armani Sì (rather uninspired if you ask me, though beautifully shot by director Anne Fontaine) and a small interview with Christine Nagel where she explains the fundamental blocks of the perfume composition.