The subtly sweet, cozy, comforting scent of milk is a prized note in perfumes. Not only does it create a regression to childhood, welcome solace, but it enhances floral components and matches the sweeter elements really well. White florals and classical chypres often exhibit "milky" notes, due to added lactones, components whose name derives indeed from the Latin for milk; this is because in nature tuberose, jasmine and gardenia do contain lactones among hundreds of other molecules in their chemical makeup. And so do certain fruits which find themselves recreated in fruity chypres, such as plum, peach and apricot. Their infamous skin compatibility (bordering on the naughtily cuddly) isn't such a mystery; our bodies decompose proteins breaking them up in analogous materials, therefore lactones stick well on skin.

The recent rise of the gourmand fragrances sub-group (classified within the Oriental fragrance family) exhibited lots of fragrances that take milk notes as a departing point: either as wholesome as milk itself (notably in Matin Calin by Compotoir Sud Pacifique) or reminding us of milky desserts, such as rice pudding (as in Kenzo Amour), the condensed milk used in sweet tea (Jo Malone Tea Collection Sweet Milk), or crocus-tinged milk puddings (L'Artisan Parfumeur Saffran Troublant). 
Retro and vintage fragrances are often described as "lactonic" when they exhibit milky facets, in contrast to contemporary fragrances under the gourmet umbrella; that's because lactonic although derivative of the Latin word for milk (lac, hence lacto- etc.) is a very specific perfumery jargon term denoting the conscious use of lactones, which was especially common in older fragrances. Lactones are cyclic esters uniting an alcohol group and a carboxylic group in the same molecule.

The most usual lactones used are peach lactone (which has a milky peachy underone like in Caron's Fleurs de Rocaille) or milk lactone (Mugler's Dis-Moi Mirror has it). You can find lactones in infamous examples such as Le Feu d'Issey or Rush by Gucci. An unusual lactone emerging in a contemporary perfume is massoia lactone in Santal Massoia by Hermes., but the evocation of sandalwood and fig sap is possible because the materials themselves possess a milky facet.

Although milky notes smell similar to the drinkable variety, in reality the actual nourishing substance isn't used. Milky notes are rendered through illusion, via other materials, such as vanilla or sandalwood very often (as in Santal Blanc by Serge Lutens). These materials naturally have a "creamy" facet, a smooth, sweetish quality about them which can be interpreted as "milky" in compositions. Other materials such as musk from angelica or the resin benzoin have a fluffy ambience which can come across as milky in the right context. 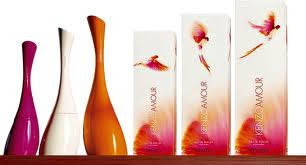 The use of lactones (see above) is a shortcut into putting a milk note into a perfume: the effect can be creamier or peachier or woodier depending on the calibrating of proportion and context. The effect of lactones into boosting the creamy facets of white flowers is the main reason why they were used so frequently in the past.

Milky notes seem to hit upon a sensitive nerve in perfume lovers and consumers in general. Almost as if going on a Jungian archetype they evoke a sense of fulfilment, sustenance of the body and the soul, a comforting elation that pampers the emotions when in stress. The popularity of milky notes is only set to rise as the times get tougher.