Chanel in-house perfumer Jacques Polge recounts a story surrounding the creation of No.19 and its appeal. In 1970, the 87-year-old Coco Chanel (who would die the next year) was wearing Chanel No.19 when she was stopped in the street by a young man.


“Coming out of the Ritz, I suddenly felt a hand on my shoulder and I turned around to see an unknown face. I was just about to tell him off in no uncertain terms, when he said to me, with an American accent: ‘Excuse me, I am with two friends who want to know the name of your perfume.’ To be stopped in the street by a man at my age, that’s not bad, is it?”


I'm lucky my significant other loves Chanel No.19 on me too!

Although the feeling exuded by Chanel No.19 aesthetically approximates the one given off chypres (i.e. inedible, perfume-y, aloof, sophisticated, the antithesis of the "blonde bombshell airhead" cliche), the famous Chanel fragrance stands as exhibit A why perfumery appreciation can't be merely a subjective, aesthetic viewpoint but in many ways forms a technical matter demanding a deeper knowledge of the nuts & bolts of its craft. No.19's building blocks are not tabula rasa; in fact they belong to pillars already covered on these pages, but they merge in such a novel way that the result is something altogether unprecedented. This composition by perfumer Henri Robert, with its hint of fresh green stems cut with scissors to fit a vase, its powdery radiance and its cypress impression with lots of woody vetiver, embodies sophistication at its best.

At the time of creation (1970, the perfume was launched in 1971), the formula contained a superior grade of Iranian galbanum with natural bergamot, lemon and ylang ylang. The heart of No.19 is built on lots of rose (15% of the formula in the vintage edition, a significant amount of which is comprised of natural rose absolute of Rose de Mai, i.e. Rosa centifolia), even more lily of the valley (20%) together with a jasmine "footnote". Up to this point nothing unheard of. The lily of the valley segment with the rest of the florals harkens back to the structure of Madame Rochas, the green feeling is analogous to Vent Vert a "green" floral perfume with its fingerprint dose of galbanum. The small inclusion of a carnation and sweet spice (pimento) "chord" recalls the great spicy florals of which L'Air du Temps is a prototype.

Three factors however make Chanel No.19 unique and unparalleled:
1) the predominance of orris however (the essence rendered from the dried rhizome of iris flower), here elevated from the supporting player status it enjoys in most perfumes
2) the overdosage of Hedione (around 25%) which diffuses the rest of the notes and gives that odd freshness and
3) the backing up with around 12% of a woody vetiver accord.
The floral elements (really, the rose) are supported and balanced by the woody notes, guiacwood, sandalwood, cedar (in the form of cedryl acetate) and the above mentioned vetiver. The bridge between the woody materials and the orris is methyl ionone, at a significant percentage. Methyl ionone itself is a molecule used to render violet-orris notes in hundreds of perfumes. 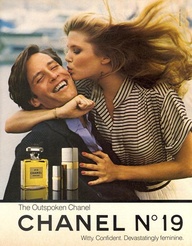 The wonderful richness of the vintage versions (in either parfum or eau de toilette) suggest that trace materials could have been used, as well as (probably) tinctures of musk, civet and ambergris, all but eradicated in the onslaught of perfumer regulations answering to animal rights concerns and allergens restrictions. Today's eau de toilette is boosting its vetiver and cedar notes over a fresher floral core, making a woody floral echoed in the denser version of the extrait de parfum, while the eau de parfum remains the rosiest of the three concentrations available. The predominance of orris means that it is an expensive formula to maintain, as natural orris price skyrocketed in the decades following No.19's creation. The main constituent of orris, the molecule irone, exists in isolation, and recent production of iris in China cut down the maturation process that orris demanded from 3-6 years to only 3 months (resulting in the Year of the Iris, a few seasons ago, when every perfume house, niche and mainstream, was issuing their own "iris perfume"). Nevertheless, the performance of the traditional natural orris is hard to emulate.

Up till this point, a clear case of a "woody floral". It is the inclusion of oakmoss and a leathery impression (rendered via isobutyl quinoline, with its sharp green fangly aspect) which complicate things and give a mossy character, recalling chypre perfumes to many perfume fans. However Chanel No.19 does NOT contain that third pillar of the true chypre, labdanum! (And certainly that would be applicable for a perfume that came out decades before the recent "nouveau chypres" which changed the territory due to technical exigencies). In fact No.19 is notable for what it does not contain as much as what it does, thanks to analytical gas chromatography work performed on it: little to no aldehydes, no synthetic musks (in the vintage version), no patchouli, no vanillin and no salicylates (more on which you can read on the link).

Its advertising image has always relied on its green character: witty, confident, a bit "sporty" even, in tweeds. "The unexpected Chanel". "The outspoken Chanel". Fronted by Christie Brinkley, Princess Mara Ruspoli, Rene Russo and other models of the time.

The comparatively small commercial appeal of Chanel No.19 -and other similarly bracing "green" fragrances- does not mean it has lost its importance in perfume lineage. A dedicated cult following has maintained its status and kept it in production. In Greece for instance, surely a very small market, Chanel No.19 has never known any shortage of availability and it enjoys pride of place on the counter at all times, contrary to many other classics, exiled on the bottom shelves of department stores. Its continuous presence (also in the sillage off women on the street) has aided a recalibration of what we consider "classy" regardless of fashions and it has influenced directly at least two perfumes: the intensely green Silences (1979) by Jacomo (which is Chanel No.19's offspring to be sure) and Beautiful by Lauder (1986). In the former the same powdery green, liquid emeralds presence is felt, with perhaps a fruity accent via cassis, while in the latter the abscence of mossy and green notes kicks it more surely into the woody floral mold.