Gucci Première represents the culmination of perfumery catering to those, on the one hand, sick of too candy-like creations, but, on the other hand, not yet ready to step into more challenging stuff. At all times pleasant, bon chic bon genre, and discreet like the perfect secretary, it adds itself to the category of woody musky fragrances with citrus overtones. The latter might tempt men sharing the bottle as well despite the feminine focus of the images accompanying it. Without being dated, Première isn't ground-breaking new, but I bet that might prompt it being picked for gift giving; it's hard to beat something that offends no one! This of course can be a serious drawback too: One can end up pleasing no one enough. 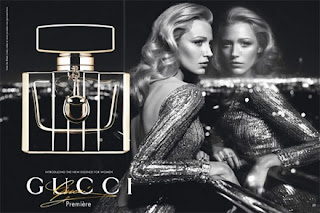 The official description stresses the glamorous element, but Gucci Première seems to me the kind of fragrance that gets one through every day, a sort of "I don't think about it too much" perfume layer that becomes part of you rather than pronouncing its presence via a complicated, intellectualized plot. To cut a long story short, it's the sort of thing that doesn't make any demands on you, take it or leave it, it's rather expected and -dare I say it- a bit boring. The dominating notes are bergamot and clean musks, clean like the ambassadress who represents it in the 40s-glamorous advertising photos, Blake Lively.
Woods and warm ambery musks coat-tail the crystalline floral chord (with a hint of white petal lily) under the first impression of fresh citrus and settle down on the skin with a softness that is surprising for such a composition. After all, the genre begat by Narciso Rodriguez For Her isn't known for its low sillage! Gucci Première however, for better or for worse, depending on your particular viewpoint, remains at all times subtle, even fleeting (it has the lasting power of an eau de toilette rather than what it is presented as, which is eau de parfum). No harshness in the leather note at all either, to the point where it shouldn't raise a brow by the cuir-o-phobics, i.e. those with a problematic relationship with the pungent leather fragrances. More's the pity for us leather fiends!

Beautiful bottle in gold with the familiar charms by Gucci.

According to the official blurb on Escentual, where the new Gucci fragrance is available: "Inspired by the Gucci Première Couture collection that debuted at the 2010 Cannes Film Festival, Creative Director Frida Giannini conceived a new fragrance legend in the iconic and sophisticated form of Gucci Première. Première is the scent of a woman who is accustomed to coming first, whether in her career or in her love life. She makes the same exceptional demands of her perfume, wanting only the very best for every occasion. Just as a leading lady graces the red carpet with her couture Gucci gown, so every woman deserves her Gucci Première moment".