If Calèche encapsulates perfumer Guy Robert's idea of a great taste feminine perfume, then Équipage is his idea of the perfect masculine; sober, handsome, restrained, graceful. These two Hermès fragrances embody both the house's easy, effortless elegance aesthetic (you can imagine them as "old money" contrasted with nouveau rich) and Guy Robert's idea that only a "lived-in" ambience about a scent makes it truly romantic; if you need more proof you can just test out Madame Rochas and his other marvels (Amouage Gold, Dioressence etc). 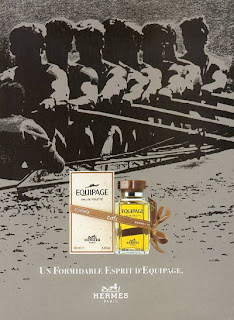 Scent Description
Aromatic, spicy and woody, the brief for Équipage was based on the success of Monsieur Rochas, composed by the same perfumer (Guy Robert) just one year prior, demanding the scent of a "cold pipe".  Word has it that Jean Louis Sieuzac also worked on this one. The smokiness is there all right (I'm hypothesizing birch tar to give a smoked leather note, reminiscent of the Cuir de Russie type of scents), but there's pungent dryness instead of the usual rum casket fantasies of honeyed milky tobacco; such as the ones evoking languorous Turkish escapades that Lutens brings to his Fumerie Turque, to cite but one example.  Liatris is an interesting note: it possesses both a herbaceous facet on one end and a hay & tobacco facet with only a subtly vanillic undercurrent on the other end, so it balances off nicely the bitter, pungent top notes of Équipage, reinforcing the concept of a smoking pipe.

Équipage is resolutely old-school and conservative smelling ~therefore probably anathema to anyone under 40, unless they have a perfume obsession~ and like an experienced acrobat balances between strength and finery, between the rustic herbs, the bitterness of the clary sage opening and the bite of cloves, on a base of smooth wood notes and a little sweet floral touch, a combination as dependable as a gentleman of the old guard. The florals cited in official notes description give only half the truth: the lily of the valley gives but crispness, the rosewood a profusion of linalool (that ingredient familiar from classic lavender), the carnation adds a clovey tint, as carnation composing was done by utilizing clove essence.
The true character of the fragrance evolves from the evolution of the aromatic, rustic and bitter herbal essences into rich woody, earthy notes in the drydown with a tinge of leather notes. In this it is in the same league as the equally magnificent Derby by Guerlain, which epitomizes the smooky woody fragrance genre; perhaps the Guerlain is a bit more balsamic and greener than the Hermès.

Who is it for?
I can vividly picture Équipage on a tweed-clad man out in the woods, lithe, supply riding his horse with his gun between horse bridles and saddle, leather lapels & patches on the jacket, having a good time only to return home when the sun is beginning to set. Perhaps it's so old-school that such a picture doesn't really seem ridiculous or overblown. Hermès at any rate likes to emphasize its "team player" name, showing the bottle over the photo of a rowing team. Cool, I get it. That's got to be some posh British college we're talking about, where the idea of a team spells dedication and loyalty and doesn't mess with anyone's individuality. Équipage smells perfectly individual nowadays, sticking like a diamond ring among graphite pencils, so perhaps my modern take is skewed. I suppose more men smelled in some variation of this liquid nectar back then....and oh boy, weren't those the times.

Équipage seems perfectly at ease on a smoker too, a heavy one at that, fusing with the remnants of the ashtray scent on the clothes into producing something delightful rather than repelling. No wonder in this age of cigarette demonisation Équipage looks like an outcast. Most interestingly this masculine eau de toilette works well in both the hot and cold season and lasts equally impressively, as it seems to morph to suit the weather. Winter brings out its crispness of sweet earth and woods. Summer heat highlights its cooling herbal, almost mentholated effect and its spicy kick.

I am a bit at a loss on how it would be possible to recommend it be worn by women, evocative as it is of virile-looking men like Sean Connery, however I have to share that I indulge myself in my vintage bottle more often than I'd care to admit. Perhaps there's something to be said about women embracing the idea of wearing a virile scent from time to time...

Vintage vs Modern Équipage
The vintage versions of Équipage bear a light brown cap with a screw top design; the modern is sparse, black, architectural. The modernised version, available at  Hermès boutiques and department stores with a big selection of Hermès fragrances where you will have to ask for it by name, has attenuated some of the pungency and projection of this fragrance, without messing too much with its bouquet garni of herbs. If anything it's more citrusy and terpenic now than leathery, but not by much.