Songe d' un Bois d'Été is perfumer Thierry Wasser's offer to the chthonian deities, a prophylactic philter for safekeeping from all miasmata. Simply wonderful rendition of the oud/aoudh perfume raw material, with none of the synthetic Band-Aid note that often creeps us in modern compositions touting the precious essence as a protagonist, Songe d' un Bois d'Été (i.e. Dreaming of a Summery Wood, part of Les Deserts d'Orient trio) is balanced and magnificent from all angles and can become a special man's ~or a woman's who loves woody somber compositions~ scented amulet. 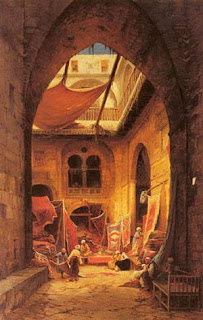 Straddling the line between contemporaneous sensibilities and antique exotic traditions, it has the patina of aged woods and bronze artifacts hiding in some cave in the desert, yet its Frenchiness is undeniably there too; its exceptional craftsmanship is immediately evident, its restrained balance the work of experienced hands and a Swiss organized mind. You can read Guerlain in the fine print, even if the capitalization is in Arab calligraphy. There is no excess, no overindulgence, but an ornate "abaya" cloth which hints at the contours it hides, an oil painting in saturated burnished tones. Like Encens Mythique d'Orient, it proves Wasser's maturity and heralds good things for Guerlain.

The most Arabian-inspired in the newest Guerlain trio, this intensely woody fragrance smells alternatively parched and sweetish, revealing different facets throughout the duration on the skin; somewhat medicinal at times too, yes, but with smiling mien following the sobriety, like dark leathers laid in the sun underneath hanging dried herbs (I smell laurel and myrtle). Indeed the opening of Songe d' un Bois d'Été is balmy, pinching the nose with its herbal, aromatic, sunny quality, balancing the powerful woody elements of oud and leather pungency to follow. There is an indeterminate spicy, ashy-green segment, reminiscent of crushed cardamom pods that enter Arabian coffee and chocolate desserts (indeed a hint of chocolate can be attributed to the rising of patchouli from the base) and a stamen or two of leathery saffron (reminiscent of the treatment in Cuir de Lancome).
Mingling with the aromatic top notes, this spiciness provides the piquancy needed to lift the composition. The progression is somber, diffusive and saturated, (burnished cedar and Iso-E Super take a big percentage of the formula), with intense notes of oud chips burning (the note is reminiscent of the Mona di Orio perfumes oud ingredient), myrrh resin and lush jasmine sambac; the latter lightly sweetens the proceedings with its narcotic floral facets. Not necessarily the most innovative or driest leather fragrance (that would be Guerlain's Djedi), nor the greatest woody to ever come out of the house (that distinction probably belongs to Derby), but it is so carefully composed one can't help but admire it.

Songe d' un Bois d'Été is that rare thing: an predominantly oud wood fragrance that doesn't need to be unpleasant and bitter to tout its exoticism, to mark its seal of connoisseurship, to establish itself as niche. It simply exhales quality and mastery all around and is a delightful addition to any discerning perfume wardrobe. Admittedly a little bit masculine for most women''s tastes, but none the worse for it. 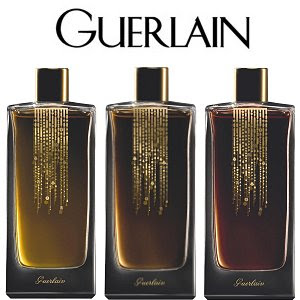 The Guerlain perfume bottles of Les Deserts d'Orient are adorned with Arab-cript calligraphy down one side, the French names down the other side. They are the tall, architectural style of the collection L'Art et la Matière with the antique gold overlay on the sides holding 75ml of perfume. The concentration of the fragrances is Eau de Parfum for tenacity. Prices are set for 190euros/AED990 per bottle. The perfume is available exclusive in the UAE and the Guerlain flagship store. Also via the connections of Wim in Parfumerie Place Vendome in Brussels.