A warm, sandy beach...soaking up the rays, you rest sprawled in a deckchair, your hand hanging down in the shadowy spot beneath it, idly caressing the sugar-spun grain...kicked off sandals nearby...a faint hint of tropical flowers and suntan lotion in the breeze...and the world sits still for a while. This summer fantasy leads to soothing thoughts and sensual imaginings and it's all the fault of Guerlain's Lys Soleia, I'm convinced! An interplay between light and shadow, between heat and , basking in the afterglow. 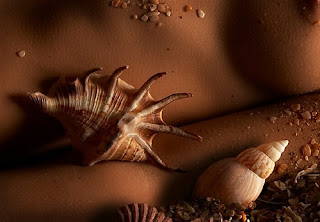 Guerlain had the brilliant idea to offer something for casual wearing and younger dispositions around 1999, the Aqua Allegoria line. Incongruent, with agile, ambrosial specimens alongside undoubtably acrylic painting flops, the line has thankfully picked up in the last couple of seasons (for instance see Guerlain Jasminora ) and Lys Soleia, the latest fragrance in the collection, is among the clear winners.

As announced previously, Aqua Allegoria Lys Soleia is centered around a semi-fresh, semi-tropical floral composition, which reproduces the sensuous aroma of oriental yellow lilies and the regal white lily. The treatment is initially leaning into the delicious tannning lotion aroma of classic European favorite Ambre Solaire, with a tangy hint of citrus ling-a-ling (and Guerlain is no stranger to great citrus, just witness Shalimar Light), rich in salicylates and the tropical floral note of ylang ylang as well as the greener part of the tuberose plant, heady and sensual. Lys Soleia is taking a page off both Guerlain's own Terracotta Sous le Vent dry oil and the green-powdery-lily strewn Vanille Galante in the Hermessences series by Hermes with its delicate veil of vanilla. The spicy touch of lily is nicely peppered, biting gently, bridging the gap between lily and ylang ylang. This tender and very temperately sweet fragrance doesn't really lose its sensuous tropical flower feel upon drying down on the skin, but enhances the muskiness of warmed skin and light creamy vanillic nuances. 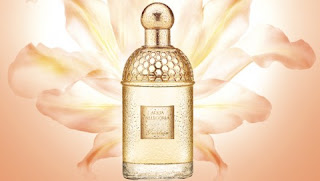 Perfume enthusiasts who like Nuxe Parfum Prodigieux, Cartier Baiser Vole, Serge Lutens Un Lys and Hermes Vanille Galante are advised to try it; it shares kindred DNA. But so are lovers of feminine tropical florals who don't want oppressive clobber-you-down tiare re-runs smelling cheap. Lys Soleia smells eerily familiar and at the same time freshly renewed, with a delicacy and balance of composition that denotes true Guerlain mastery. Perfumer Thierry Wasser proves he can carry the baton after all. Who would have thought he'd do it with an Aqua Allegoria?