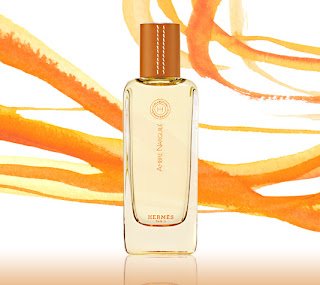 The info originated from a newsletter email from a personal shopper on Ebay, who assures that availability of the scent is sustainable in France (and the rest of Europe I surmiss, wherever the Hermessences perfumes are available of course). This does taint the news a bit beyond the 100% certified, but phonecalls to the NYC Hermès boutique seem to confirm there are no bottles left right now. A quick check on the US Hermes site also indicates there's no Ambre Narguilé to be sold, though there is some on other international official pages. This latter evidence isn't conclusive nevertheless, as in the past whenever there was some shortage of supply, there was an occasional dissapearence of something from the pages. But all combined, they do pose a weird situation.

Given that Ambre Narguilé has been a steady best-seller in the Hermessences (especially in America) from day one and that the cut-off of distribution seems regional rather than pandemic for the moment, it does present its own little puzzle: It can't be IFRA ingredients restrictions, as that would mean a global cease on production, not just a localised one (plus it would make sense there would be first a European shortage and only later a US one, not the reverse). It can't be a distribution problem, as Hermès is itself responsible for that and what goes for one would go for all. It can't be low sales, because....well, you know that ain't it.

Plus, a tantalising detail for those who are meticulous: If you go to the US Hermes site and try to fill a gift box with all four travel bottles of Ambre Narguilé, then lo and behold, it lets you do it and the item goes into your shopping basket, no questions asked.

Bottom line: Something smells fishy; I smell a false rumour.

This is how the delicious Ambre Narguilé fragrance is officially described:

"Amber honey with swirls of smoke from the East. Savory, sensual, enveloping.
"Amber, the Western expression of Eastern fragrances, has a warm, enveloping, almost carnal smell. I wanted to imbue this idea of amber with the memory of the East I love where tobacco - blended with the smells of fruit, honey and spices - is smoked in narguilés, or water pipes, and where swirls of smoke diffuse a sweet sense of intoxication.
Jean-Claude Ellena
Be sure to click on the little icon under the JCE quote on the UK official page to hear the perfumer talk about it and to hear it pronounced properly in French.

For those in the US who are desperate to get their Ambre Narguilé fix, in the meantime, you can appease yourselves with -if not an exact dupe, then a close alternative- Spicebomb by Viktor & Rolf.