Officially Sandro Botticell's painting "Venus and Mars" is a story which recounts the omnipotence of love that conquers even the most powerful war. However, new research suggests a daring reading: that behind the image of the blessed love, may in fact be hiding the display of sexuality of plant hallucinogens!

The art historians had overlooked one detail, and it was David Beligkcham, director of the Institute of Art at Sotheby's house who zoomed on it. Looking closely at the satyr on the bottom right part of the painting (click to enlarge), he recognized a fruit that belongs to the species Datura Stramonioum known as "devil's weed" or "devil's trumpet", a plant with a history of hallucinogenicy which induces men and women to take off their clothes and frolick away. The hallucinogenic effects are recorded in ancient Greek texts hence the use of Datura either as an aphrodisiac or as a poison.

The table set out to describe the painting by Boticelli in the National Gallery of England bears the following description: "It is a scene of adultery, since Venus was the wife of Hephaestus, the God of Fire, but it contains a moral message: the power of love to win and to civilize." Beligkcham on the other hand believes that the message is more subversive. "The fruit is offered to the viewer, so it is important intentionally," quoted in The Times. "The Botticelli is keen on plants with symbolic significance. For example, in the back there are laurels, which are references to his supporters, the Medici family whose emblem is the laurel. The Datoura known in America as "a hallucinogen of the poor" reveals the symptoms in the male figure. Inhibit the natural functions and induce excitement, so it makes you want to get undressed. It also makes you swoon. "

There are a few perfumes which are directly inspired by and incorporating datura in their composition: Perfumer Ineke Ruhland makes a sweet and mysterious datura fragrance called Evening Edged in Gold and Serge Lutens also proposes Datura Noir for a more tropical and suede-laced take. Maître Parfumeur et Gantier has Secrète Datura in their line-up, a powdery, elegant take of the herbal tinge of datura allied tovanilla-smelling heliotrope. Other fragrances include Keiko Mecheri's Datura Blanche, White Datura by lluminum Perfume and Green Datura by Voluspa. 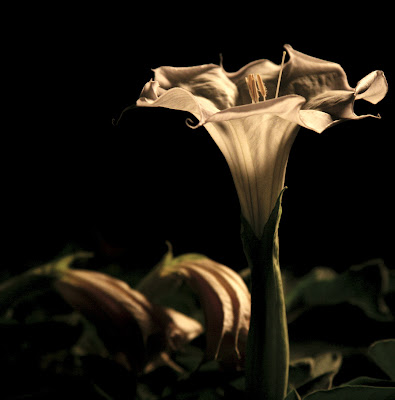 The theory regarding the Botticelli painting goes even further as Beligkcham suggests the two figures in the table 15th century painting are not even Mars and Venus, but Adam and Eve, while the plant is none other than a stem from the fruit of the Tree of Knowledge, the very thing that caused their expulsion from Eden; although often referred to as an apple, in the Bible it is not specified exactly. Is datura the elusive element into something even further? You shall be the judge of that.