Blackberry and raspberry were very piano. Vanilla had elements of both piano and woodwind

"Sweet and sour smells were rated as higher-pitched, smoky and woody ones as lower-pitched. Blackberry and raspberry were very piano. Vanilla had elements of both piano and woodwind. Musk was strongly brass." Thus claims a very interesting article in the Economist named Smells like Beethoven, focused on the study of individuals comparing sounds to smells. 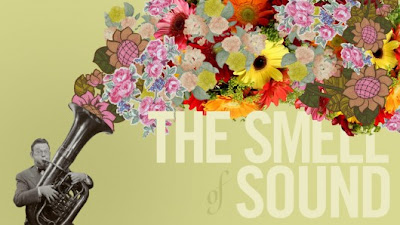 "Most people agree that loud sounds are “brighter” than soft ones. Likewise, low-pitched sounds are reminiscent of large objects and high-pitched ones evoke smallness. Anne-Sylvie Crisinel and Charles Spence of Oxford University think something similar is true between sound and smell.
Ms Crisinel and Dr Spence wanted to know whether an odour sniffed from a bottle could be linked to a specific pitch, and even a specific instrument. To find out, they asked 30 people to inhale 20 smells—ranging from apple to violet and wood smoke —which came from a teaching kit for wine-tasting. After giving each sample a good sniff, volunteers had to click their way through 52 sounds of varying pitches, played by piano, woodwind, string or brass, and identify which best matched the smell. The results of this study, to be published later this month in Chemical Senses, are intriguing."

The whole synaesthesia experiment has yielded results that show that even for "normal" people some overlap between the senses does happen.