Chanel has just released their new 2011 commercial for Coco Mademoiselle starring Keira Knightley in what has to be the most bootylicious outfit out there for the brand (evah!) and I'm grumbling with a sense of disappointment. Before you start calling me a picky bitch, hear me out and see if you agree. 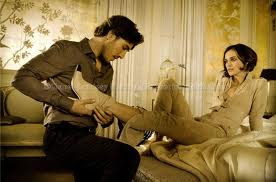 The commercial is gloriously saturated in rich, peachy-golden neutrals, echoed through settings, clothes and protagonists' colouring. The Ducati is eye candy. Keira, on whom I never was particularly big, looks gorgeous in sprayed-on beige & black as well, don't get me wrong! Whereas gowns with decolletage and bare arms let her skeletal glory show to much discomfort and to thinspiration for teens (apparently!), a fitted catsuit which hides her ribcage and, on the contrary, puts accent on her meatier parts (those thighs, that butt) suits her just fine. I was about to give a wolf's whistle upon seeing her riding, ass pert on that Ducati motorcycle, director Joe Wright hedonistically shooting it from the back for a brief while~wait, was it three whole seconds?~ but then remembered my XX chromosomes and restrained myself. Lots of guys won't, though, obviously because they don't have a matching set (of either chromosomes or butt cheeks), and that's the whole point: The message is Keira in Chanel has something going on for her, something wild, something sexy! So will -hopefully- every girl she's gifted with it. Perfume after all is largely the fantasy of hanging a Ferrari porte-clefs on your humble Fiat, isn't it?

But haven't we seen that before? Or is that too much teasing makes the heart go butter instead of aflutter? I'm surprised they chose It is a Man's World (interpreted by Joss Stone, yet again!) instead of Wild Thing by The Troggs as the soundtrack: Keira's certainly a wild thing if the full 3:20 minutes are to be taken into account: she makes pretty eyes at the photographer, with whom she has some sort of relationship. She shoots her as herself, the face of Chanel (a bit a la David Bailey) and then she leaves him all...frustrated, shall we say, leaving out the window. Sneaky minx... 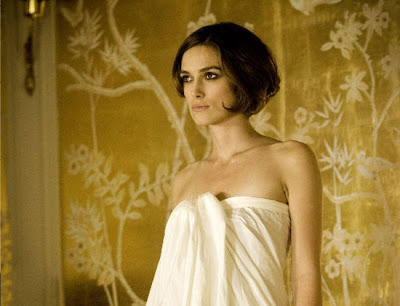 But then the song choice does make sense after all, going straight for bull's eye actually: This is Chanel's positioning of Coco Mademoiselle as for the "powerful" young woman, the seductress, the one who yields the power of her appeal over those she meets; to the point that she doesn't actually need them anyway. She onanistically can leave them behind; her power lies within herself. The full commercial, the teasers and interviews which preceeded it said clearly this is Chanel emasculated, a Chanel superwoman, an androgynous figure ~certainly true for Keira's boyish figure, true for Gabrielle Chanel as a young lass too. But we're not dealing with an Amazon; far from it!
To my mind the era of the Glamazon has died alongside Helmut Newton and his photographs of women as mistresses of all they survey. Keira and Coco Mademoiselle are ~let's be honest~ too cute to even entertain the thought that they yield so much power. This is why it was necessary to have Keira pronounce it "not too sweet, not too overpowering, not flowery" in interviews, lying -yes, lying- that she used to wear men's scents blah blah blah....And therein lies the trap: Coco Mademoiselle does exhibit a fragrance structure of pretty & quite sweet flowers atop a rather masculine loud patchouli and vetiver base: a five o'clock shadow shows underneath a checkbone meticulously dusted with Nars Orgasm. Nevertheless, that five o'clock shadow doesn't come home bringing the bacon, doing a real job, taking it like a man. She still relies on tried & true feminine wiles sprinkled with promise and only has the motorcycle and boots to show for toughness. And what's more she proclaims to the whole wide world she's open for business, Coco Mademoiselle having aquired ~through use and abuse~ the inferred message of "come on big guy, I'm here waiting for you to hit on me, all smoky eyed, and martini at hand". Now that Coco Mademoiselle is everywhere, some of the mystique has gone and this new commercial doesn't help much. And nothing of it is Keira's fault. But they had been going for it since a while, so why am I complaining?
The first Keira-Chanel commercial, showing the stylish thief, who burgles through an open window to put on those gorgeous jewels and who then appears in a long red dress at a gala from which she leaves alone, much amused with herself, in my opinion exhibited real style, a sense of feminine independence and a playful desire for adventure. What does this newer one communicate? How to be a cock teaser? Chanel, you've come a long way; hopefully the Ducati doesn't stop here...

What do YOU think?