It is no secret that Lalique's Encre Noire for men (created by Nathalie Lorson) has been one of the best fragrances in the usually crystal-shattering-sweet Lalique range. Its dark vetiver aura casts shadows on lots of other vetiver scents competing for excellence, from Vetiver Extraordinaire by F.Malle to which it is closest to scent-wise, to Bois d'Ombrie by Eau d'Italie and on to more variable vetivers (See our Vetiver Series for ideas). 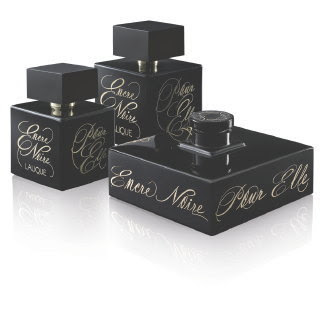 Now comes a feminine counterpart of Black Ink to smooth out the divide between the sexes and propose a more polished version for the women who had been borrowing their boyfriends' dark bottle. The idea had been at the minds of Guerlain too when they took the femme approach to their already excellent and best-selling Vétiver and they created ther wonderful Vétiver pour Elle, first as a travel-exclusive and now part of their Les Parisiennes boutique line.

"Christine Nagel, the perfumer who created 2008's Lalique White and Narciso Rodriguez for Her in 2003*, is the nose behind the new fragrance and was inspired by the unusual opportunity to create a vetiver women's fragrance. As she exclaimed to Basenotes "why should rose be for females and vetiver for males? Who decided this?"

**Aphrodite's Kephali (=Venus's head) is a toponym of an Early Minoan outpost site in Eastern Crete, Greece, where pithoi, ceramic vessels, were found containing lumps of incense. I am hypothesizing the kephali note could reprise this legendary aroma. [Of course kephali is a general term for other toponyms throughout Greece as well as kephali (κεφάλι) means head in Greek]. However kephali is also a component in ethyl fish oil, and scented fish oil also played an important role in ancient religious rites, a fact which might give a different spin to this. In any case, and most probably, it might all be a misprint, as Kephalis (with a capital K) is a woody ambery aroma-chemical, quite popular in recent releases.

The eau de parfum of Encre Noire pour Elle will be available in 50ml/1.7floz and 100ml/3.3floz while there will be an ancilary body cream in 200ml/6.6floz. The new Lalique launches in September 2009.
There will also be a rare chance for collectibles: The Parfum Extrait version will be issued as a one-off in only 99 numbered flacons, in a crystal cube toppped by a round crystal stopper with gold caligraphy as well (The design reminds me of the Gucci Eau de Parfum one, but could be entirely different in person) This special edition will cost £600 for 60ml/2 floz of concentrated perfume extract. Enough quantity to last you a lifetime!

*NB: Narciso For Her was co-authored by Francis Kurkdjan.