Mothers and Kids and the Scents that Bind Us Together

“And how should a baby smell in your opinion?”
“A baby should smell good!” the nurse {Jeanne Bussie} replied.
“What does good mean?” father Terrier’s voice sounded booming. “Lots of things smell good: A nosegay of lavender smells good. Chicken soup smells good. The gardens of Arabia smell good. How does a baby smell?” […]
“It’s not that easy…” the nurse began “because…they don’t smell everyplace the same, although they smell everyplace wonderful, father, you understand…on their feet for instance, they smell like a smooth, warm pebble ~no, make that clay…or like butter, like fresh butter. And on their torso they smell like …biscuit soaked in warm milk. But on the top of the their head, right there on the crown, right here where you don’t have anything anymore” and with that she touched the centre of the bald spot on father Terrier’s head, who, affronted with this stream of detailed nonsense had remained speechless and had submissively bowed his head, “here, they smell exquisite! Here, they smell like butterscotch, so sweet and wonderful, father, that you can’t really imagine! If you smell a baby there, you will love it, whether it is your own or someone else’s”. [*] 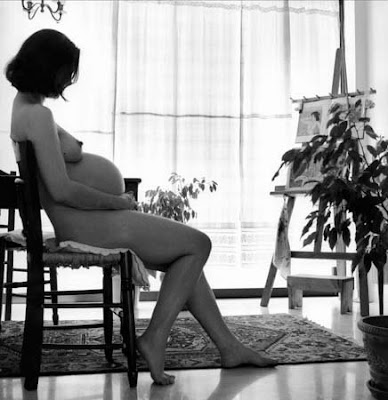 When I first read those memorable lines in Patrick Süskind’s classic novel Das Parfum, the story of a man with an extraordinary sense of smell but no personal odor of his own, I was but a mere teenager. The thought of having a baby of my own was not even a spermatic idea at the back of my mind; it was simply an indefinite non-entity! I was never one to coo in maternal mode upon seeing babies ~although I always had a fondness for small children and their intelligent way of interpreting the world~ and one who never heard her biological clock going ding dang dong “time to have a baby”. Love for a man took care of it. And I never had a sick day or perfume-free day all the while.
We often hear “you can’t judge unless you’re in someone’s shoes” and that goes doubly so for parenthood. But upon smelling my own, I remembered how those lines from the novel took their own life, their own truth, and the miracle was happening right under my own… nose! It’s indecipherable for anyone who isn’t a mother and it’s the special bond which forms between two beings at their most primal level. Like we choose a mate that their natural odor pleases us, so our offspring bear in their genetic makeup the scented fingerprint which ties them to us, making us able to differentiate our own among many. I often linger over my sleeping child inhaling deeply the yummy smell with eyes closed...And I can imagine that an adoptive mother grows to learn ~and eventually love~ their children’s smell, just like they learn to recognize their tastes and their idiosyncrasies. Because that personal scent is a constant reminder and a symbol for nurture and love.

But babies very quickly show off how they are able to smell their mother out as well! This is why I forwent the beloved Mitsouko and my emblematic Opium fumes for a while to give a chance for this special bond to form and for fenugreek tea to make me all maple-y smelling. It’s enough to breastfeed once to see how the baby turns its small nose and mouth to the sweet scent of milk like a hungry little puppy; that nectar of nature meant to help it grow, to help it become the man or the woman who will be in later life is naturally scented with a vanillic aroma which is perpetuated through baby food later on for a reason. Reminiscences of those tender moments are never far off, read like a language of smiles and smells.

The pleasant is never coming without the less enjoyable and changing nappies soon gets you intimate with the urinous muskiness of baby pee (which has an eerily animalic quality like that of real deer musk and the background of Guerlain's Shalimar) and the sulphurous odor of poop as soon as a mixed diet is introduced. Perhaps the baby’s own reluctance to get disgusted by the excrement however is the most interesting observation and one which you have to see with your own eyes to attest that although nature has guided us through smell into making the healthiest choices, our aversion to poop is not hard-wired genetically but is a product of cultural integration.

An olfactory inquisitive mind can have a field day while adventuring into the Land of Baby Smells: A whole industry is making changing a nappy its focus and every little thing has an odor of its own ~from the paper-mill cedar scent of nappies themselves which remind me of L'artisan's Dzing! to the heliotropin and linalool of scented toilettes/wet-wipes with their nod to Après L’Ondée ; and on to the rosy-almond scent of the nappy cream and the vanilla, geranium and citrus of Johnson's & Johnson's baby powder. The sweet smelling hesperidia and lavender colognes for kids like Tartine et Chocolat Ptitsebon by Givenchy or Petit Guerlain , put on clothes, are not an act of sexing the baby up or hiding their glorious olfactory fingerprint, but a gesture of bien-être dans sa peau, a very European traditional gesture of propriety. My mother did it to me, I do it to my kid! 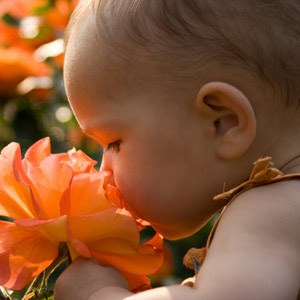 Yet what I am most interested in is how the child gets to get guided through life from the olfactory point of view. The eyes light up at the smell of food cooking, giggles erupt when warm milk fills the kitchen with its comforting scent, inquisitiveness starts when presented with a new flavor such as sour pineapple, garlicked meat with okra or the earthy aroma of lentils’ soup. How nostrils quiver when out at play and a small flower gets under the nose. How animals, places and people are identified and often compared by smell: “This is the bakery where we’re greeted by the scent of fresh bread- circles with sesame”; “That’s Freddy the tabby who smells like cassie” and “Where is my sweet-smelling papa?” I intend to give that kind of education to my kid and let it form its own olfactory landscape where no smell is bad and no flavor is not to be tasted; and thus hopefully create a sensuous human being who will enrich others.

Happy Mother’s Day to all!

*translation from the Greek edition by Perfume Shrine.
Art Photography by Spyros Panayotopoulos/eiakstiko.gr and istockphotography.com