The advertisements read: "Exuberant. Smouldering.Uninhibited".  It was all that and more. Mink coats, cigarette-holders, lightly smeared eyeliner after a hard night. Dioressence launched as "le parfum barbare" (a barbaric perfume); the ready-to-wear fur collection by Dior in 1970 was orchestrated to give a powerful image of women as Venus in Furs. Commanding, aloof, demanding, even a dominatrix. The fragrance first launched as a bath oil product, reinforcing the name, i.e. Dior's Essence, the house's nucleus in liquid form; Dior wanted to write history. It later came as a stand alone alcoholic perfume, the first composed by perfumer Guy Robert for Dior and history it wrote indeed. A new breed of parfum fourrure was born! 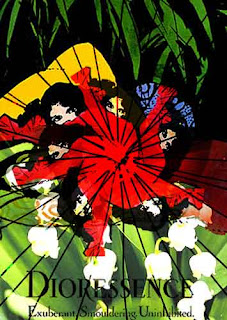 Dioressence: A Wild, Untamed Fragrance
The fragrance of Dioressence itself, in part the brief being a depart from Guy Robert's refined style, was the love affair of ambergris (a 100% natural essence at the time) with the original 1947 Miss Dior, a chypre animalic perfume, itself laced with the animal notes of leathery castoreum in the base, so the two elements fused into each other most compatibly. Ambergris is lightly salty and nutty-smelling, creating a lived-in aura, while leather notes are sharper and harsher, especially when coming from castoreum, an animal essence from beavers with an intense almost death-like stink. The two give a pungent note.
In Miss Dior this is politely glossed over by a powdery gardenia on top. The animalicistic eroticism is only perceptible in the drydown. In Dioressence the sexiness is felt from the very start, only briefly mocked by a fruity lemony touch, and it only gains from further exposure to notes that lend themeslves to it: rich spices, dirty grasses, opulent resins, sensuous musk. In a way if Cinnabar and Opium (roughly contemporaries) modernised the message of the balsamic oriental classic Youth Dew, Dioressence gave both a run for their money, being bolder like the Lauder predecessor, yet in a rather greener scale.

The intensity of the animalistic accord in Dioressence was boosted even further by the copious carnation-patchouli chord (much like in Jean Carles sexy Tabu), spiced even further with cinnamics (cinnamon notes) and given a glossy glamour with lots of natural jasmine. The greenery over the oriental-chypre basenotes is like the veneer of manners over the killer instinct. Still the Guy Robert treatment produced something that was totally French in style. You can't help but feel it's more tailored, more formal than any modern fragrance, perhaps what a power-woman of the early 1980s would wear to power-lunch, even indulging in some footie work under the table if she feels like it, but its wild undercurrent is almost foreshadowing the contemporary taste for niche.

Why Dioressence Changed...to the Worse
Alas the perfume after a brief career fell into the rabbit-hole of a teethering house (The Marcel Boussac Group bankrupted in 1978 and it was purchased by the Willot house, which also bankrupted in 1981). Not only had the vogue for big orientals been swung in a "cleaner", starchier direction in the meantime (Opium, Cinnabar, Giorgio), but the management hadn't really pushed the glam factor of Dior as much as Karl Lagerfeld had revolutionized, nay re-animated the house of Chanel (the effect in the mid-80s of that latter move was analogous to the miraculous push Tom Ford gave to Gucci in the late 90s; nothing sort of spectacular). Dior would need almost a whole decade to get its act together, bring out Poison (1985) and find its financial compass under the LVMH aegis. By then it was down to familiar LVMH accounting bean-counting and therefore marvels like Dior-Dior perfume and Dioressence were either axed (former) or given catastrophical face-lifts (latter). Same happened with the ill-fated, yet brilliant Dior masculine Jules, which had launched in those limbo years (1980 in fact). 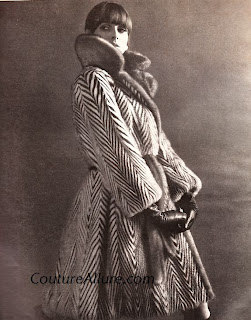 Comparing Vintage vs.Modern Dioressence
I well recall the old formula of Dioressence, back when it was a mighty animalic-smelling oriental with moss in the base because it was alongside (vintage) Cabochard my mother's favorite perfume. She was neither particularly exuberant, not knowingly smouldering and rather inhibited, come to think of it. She was a real lady, through and through, and yet she loved Dioressence, le parfum barbare! (and her other choice isn't particularly blinkered either, is it?) There's really a dark id that is coming throuh perfume and allows us to role-play; what's more fun than that? The Non Blonde calls this Dior "Miss Dior's Casual Friday outfit" and I can see her point; it's letting your hair down, preferably for acts of passion to follow.

The modern version of Dioressence (at least since the early 2000s) has been thinned beyond recognition, the naturals completely substituted with synthetic replications, till my mother 's soul departed from the bottle, never to return. The new Dioressence on counters is a somewhat better chypre than recent memory, with a harsher mossy profile, a bit like a "cougar" on the prowl not noticing she's a bit too thin for her own good, all bones, no flesh. Still, an improvement over the catastrophic post-2005 and pre-2009 versions.
Dioressence first came out as a bath oil in 1969 (advertisements from 1973 bear testament to that) and then as a "real" perfume in the same year. Perfumer credited is Guy Robert, although Max Gavarry is also mentioned by Turin as implicated in the process. The newest version (introduced in 2010, reworked by Francois Demachy) is in the uniform Creations de Monsieur Dior bottles with the silver mock-string around the neck in white packaging, just like Diorissimo, Forever and Ever, Diorella and Dior's Eau Fraiche.

The Full Story of the Creation of Dioressence

In Emperor of Scent, author and scent critic Chandler Burr quotes Luca Turin: "The best Guy Robert story is this. The House of Dior started making perfumes in the 1940s. Very small scale. The first two, of which Diorama was one and Miss Dior the other, were made by Edmond Roudnitska, a Ukrainian émigré who'd studied with Ernest Beaux in Saint Petersburg because Beaux was the perfumer to the czars. So Dior approached Guy Robert-they invite him to dinner, they're talking over the cheese course, no sterile meeting rooms, this is a brief among gentlemen-and they said, 'We're doing a new perfume we want to call Dioressence, for women, but we want it very animalic. The slogan will be le parfum barbare, so propose something to us.' Oh boy. Guy can hardly wait. Of course he wants a Dior commission. And the challenge of mixing the florals of the traditional Dior fragrances into an animal scent (because this isn't just any animalic, this is a Dior animalic, if you can imagine such a bizarre thing) is just a bewitching challenge, who else would have the guts to attempt joining those two. So he gets right to work, plunges in, and he tries all sorts of things. And he's getting nowhere. Nothing's working. He's frustrated, he doesn't like anything he's doing.

"In the middle of this, someone in the industry calls him, and they say, 'There's a guy with a huge lump of ambergris for sale in London-get up here and check it out for us.' Ambergris is the whale equivalent of a fur ball, all the undigested crap they have in their stomachs. The whale eats indigestible stuff, and every once in a while it belches a pack of it back up[1]. It's mostly oily stuff, so it floats, and ambergris isn't considered any good unless it's floated around on the ocean for ten years or so. It starts out white and the sun creates the odorant properties by photochemistry, which means that it's become rancid, the molecules are breaking up, and you get an incredibly complex olfactory result. So Guy gets on a plane and flies up to see the dealer, and they bring out the chunk of ambergris. It looks like black butter. This chunk was about two feet square, thirty kilos or something. Huge. A brick like that can power Chanel's ambergris needs for twenty years. This chunk is worth a half million pounds.

"The way you test ambergris is to rub it with both hands and then rub your hands together and smell them. It's a very peculiar smell, marine, sealike, slightly sweet, and ultrasmooth. So there he is, he rubs his hands in this black oily mess and smells them, and it's terrific ambergris. He says, Great, sold. He goes to the bathroom to wash his hands 'cause he's got to get on an airplane. He picks up some little sliver of dirty soap that's lying around there and washes his hands. He leaves. He gets on the plane, and he's sitting there, and that's when he happens to smell his hands. The combination of the soap and ambergris has somehow created exactly the animalic Dior he's been desperately looking for. But what the hell does that soap smell like? He's got to have that goddamn piece of soap. The second he lands in France, he sprints to a phone, his heart pounding, and calls the dealer in England and says, 'Do exactly as I say: go to your bathroom, take the piece of soap that's in there, put it in an envelope, and mail it to me.' And the guy says, 'No problem.' And then he adds, 'By the way, that soap? You know, it was perfumed with some Miss Dior knockoff.'
"So Guy put them together, and got the commission, and made, literally, an animalic Dior. Dioressence was created from a cheap Miss Dior soap knockoff base, chypric, fruity aldehydic, plus a giant cube of rancid whale vomit[2]. And it is one of the greatest perfumes ever made."

[1] [2]Actually that's not quite true. Ambergris comes out the other end of the whale, not the mouth. Read Christopher Kemp's Floating Gold.

ad collage via jeanette-soartfulchallenges.blogspot.com, Dior fur via coutureallure.com
*Share with link: Thursday, May 31, 2012