Have you ever tasted ambergris? If you stop to think that it was prized for centuries not only for its aromatic, but also aphrodisiac qualities, the question becomes less strange.
The history of ambergris consumption is both varied and intriguing: At Falstaff's table (a character possibly based on Sir John Oldcastle) his favourite Sack wine was spiced with ambergris. Cardinal Richelieu ate ambregris-flavored chocolates and grey amber pastilles with gusto! On a sinister note, King Charles II of England famously and decadently breakfasted on eggs with (then as now very expensive) ambergris, and his mysterious death following a sudden stroke on February 16, 1685, gave rise to rumors of foul play; ambergris could have been the necessary concealer of poison, thanks to its rich, complex flavour. Indeed as I crumble a tiny lump to heat with my experimental eggs, I perceive that the pumice-like substance melts away easily with heat, imparting a delicious aroma. Even more decadently, during the Renaissance a dessert of iris flower jelly with ambergris posset (pictured below) was made for lords and queens; shooting two birds of expensive and fragrant materials with one stone! 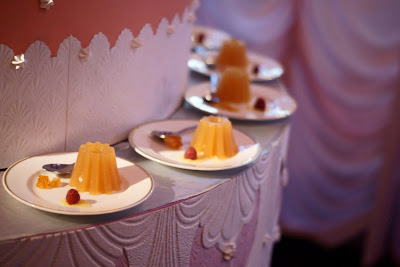 But not all was for pleasure: During the Black Plague ambergris was considered to be prophylactic use. Historian Paul Freedman writes that "Ambergris was considered the sovereign preventative drug against the plague." and people carried a grain in their pocket to stave away the miasma in the air. Alas, it didn't work so well, but they must have smelled good while at it.

Later, the renowned gastronome Brillat-Savarin recommended a chocolate drink for warming up, boosting the immune system and at the same time savouring the best of refined foods: "Chocolat Ambré" (of which I present a recipe below) was made with shaved dark chocolate and hot water, laced with a substantial amount of grinded ambergris. La Marquise de Pompadour was fond of eating truffles and celery soups followed by cups of chocolat ambré "to raise the spirits and arouse the passions". 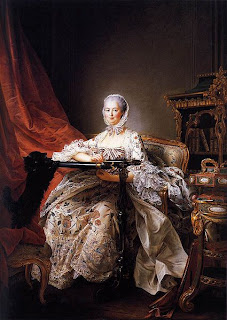 In the Middle East men consume ambergris to stimulate their sexual prowess while women believe the practice helps with infertility. Ibn Battuta, known as "the Traveler of Islam", narrates to have observed with astonishment in a city in Persia that people ate hashish and ambergris unabashedly, possibly believing ambergris to boost the narcotic effect of the drug. A lusciously erotic experience involves crushing a small dried lump of ambergris (percehd on the edge of the spoon) into organic coconut oil and allowing it to macerate for months before using. In Morocco it is traditional to use ambergris with tea; how a grain of ambergris sticked  inside the teapot's cover flavors the tea by mere contact with the vapor for years along is a miracle of nature's essences. As Karen of Globetrotter Diaries says, "Ambergris to liquids is much like 3D to movies; it gives new meaning to the otherwise familiar." I prefer to call it umami for the nose, the missing link in the realm of the senses.

"But is it safe to ingest?", you might be asking yourselves. Relax. Prior to the turn of the 20th century, ambergris was used by bartenders, liquor rectifiers, and makers of cordials & syrups as an additive in many products. But ambergris is never used alone: It is always rubbed with sugar, which acts by minutely separating the particles of the material,and then married to several other aromatics. The scents best suited to this purpose are acetic and nitric ether, oil of wintergreen, oil of lemon, oil of mace and creosote. As with truffles, ambergris has to be shaved very thinkly and added to warm drinks, so as to melt and not create a sediment. 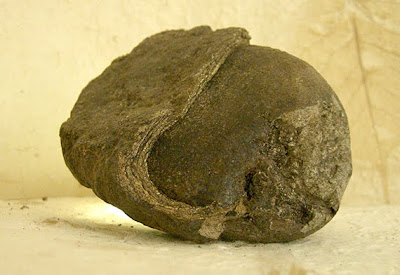 Ambergris is a substance that the wild sperm whale (Physeter macrocephalus Lin=P.catodon) regurgitates naturally; a sort of cetacean furball, clotted whale cholesterol to protect the animal's digestive track of remnants of indigested cuttlefish, squid beaks etc. [To learn all the info you need on what ambergris is and its differences with amber resin as well as its differences with Ambrox/Ambroxan refer to these herein linked articles.] 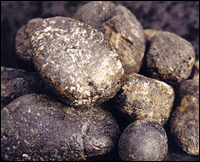 When it is fresh, ambergris has nearly no value, because its smell is extremely fecal and it has no great use for perfumery. But let it float on the ocean for some years and it gains a beautiful patina that famously chemist Gunther Ohloff described as “humid, earthy, fecal, marine, algoid, tobacco-like, sandalwood-like, sweet, animal, musky and radiant”.  It's difficult to improve on his words, but to me ambergris is that rare thing; an animalic essence that can be used even neat: its oily, marine, skin-friendly aura is intimate, but subtle, warming on the skin with an earthy, algae-reminiscent scent of bodies after a sea dip.
Whalefishers of the 18th and 19th century knew its worth. Watching "Master & Commander: The Far Side of the World", I was not surprised to come across an awe-eyed sailor dreaming of catching a whaler loot: "she'll be loaded with gold and ambergris and all the gems of Araby".

"Nor indeed can the whale possibly be otherwise than fragrant, when, as a general thing, he enjoys such high health; taking abundance of exercise; always out of doors; though, it is true, seldom in the open air. I say, that the motion of a Sperm Whale's flukes above water dispenses a perfume, as when a musk-scented lady rustles her dress in a warm parlor. What then shall I liken the Sperm Whale to for fragrance, considering his magnitude? Must it not be to that famous elephant, with jewelled tusks, and redolent with myrrh, which was led out of an Indian town to do honour to Alexander the Great?"

H.Melville's poetic associations in a whole chapter devoted to it in Moby Dick notwithstanding (with mentions of its use in Turkish cooking), the ocean and sun not only change the initially dark brown floating lumps into light greyish or even yellowish, but they also break down the basic building block, ambreine, into a quantity of products which account for the complex smell of ambergris. These lend themselves to complimenting a variety of ingredients in foods and beverages, as attested by the recipes aimed to help you cook with ambergris below.

You can buy some of the exceptional free-floating (i.e. ethically harvested) ambergris at profumo.it. (Currently I only see tincture available, but raw small lumps were available before, hopefully again)
Also available on Ambergris New Zealand.

Jean Anthelme Brillat-Savarin in Larousse Gastronomique: The Encyclopedia of Food, Wine and Cooking by Prosper Montagné with the collaboration of Dr. Gottschalk, 1961 English Ed.

"Chocolate is one of the most efficient restoratives.  All of those who have to work when they might be sleeping, men of wit who feel temporarily deprived of their intellectual powers, those who find the weather oppressive, time dragging, the atmosphere depressing; those who are tormented by some preoccupation which deprives them of the liberty of thought; let all such men imbibe a half-litre of chocolat ambré, using 60 to 72 grains of amber per half-kilo, and they will be amazed.  The grain, an old-fashioned measure, equals about the twentieth part of a gram, and we might add, ambre gris is meant, a greyish substance which exhales a smell analogous to musk, and not yellow amber, which is an entirely different thing.  Such chocolate no longer exists. In Méditation VI, Brillat-Savarin refers to chocolat ambré as 'the chocolate of the afflicted': 'I knew that Marshal Richelieu, of glorious memory, constantly chewed ambergris lozenges: as for myself, when I get one of those days when the weight of age makes itself felt - a painful thought - or when one feels oppressed by an unknown force, I add a knob of ambergris the size of a bean, pounded with sugar, to a strong cup of chocolate, and I always find my condition improving marvellously.  The burden of life becomes lighter, thought flows with ease and I do not suffer from insomnia, which would have been the invariable result of a cup of coffee taken for the same purpose'. Brillat-Savarin also praises the powers of ambergris in his Magistères Restaurants."
[source Ray Girvan, Technical Author,The Apothecary's Drawer.]

Recipe for Negus, a drink of Port or Sherry, sugar & spices, hot water and natural ambergris:

1 bottle of sherry (or port), 2-1/2 pints of water, juice of 1 lemon, a little of the peel rubbed off on sugar; grated nutmeg, and sugar to taste; add one drop essence of ambergris, or 10 drops of vanilla; all to be made and drunk warm.

source: Aerated Waters & How to Make Them; Together with Receipts for Non-Alcoholic Cordials & a Short Essay on Flavouringby Joseph Goold - J. Gilbert Smith, Publisher, London - 1880 - p.110


Take 1/2 pint of pineapple juice.
1 pint of lemon juice.
1 pint of lemon syrup.
1 pint of claret or port wine.
1/2 pound of sugar.
1/2 pint of boiling water.
6 grains of vanilla.
1 grain of ambergris.
1 pint of strong brandy.
Rub the vanilla and ambergris with the sugar in the brandy thoroughly; let it stand in a corked bottle for a few hours, shaking occasionally. Then add the lemon juice, pineapple juice and wine; filter through flannel, and lastly add the syrup.

For the really adventurous or carnivores with access to good, old, rural meat, there is an English recipe for "ambergris puddings" (i.e. sausages with ambergris) from Lord Conway's Ambergris Puddings from The Queen's Closet Newly Opened (London: 1655) on this link.