Named after the primeval garden of creation, Eden by parfums Cacharel broke new ground back when it launched (1994) "for the first time ever, encompassing the exhilaration of spring with sensuality", or rather the first fruity-semioriental-aquatic. Yes, I know, it sounds like an improbable combination like bacon ice-cream, but it managed to smell enticing nevertheless. 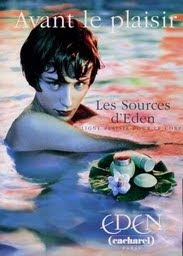 At least it did to me for the first bottle or so. Later I became bored with it and left it aside, never repurchasing. The body lotion I had bulk purchased was very nice and continued to remind me of the scent for a while longer. Imagine the shock and elation it provoked in me when my significant other remembered it when I brought out again a sample of it the other day and casually dabbed my wrists in this succulent fruity number. Memories, like cheap coffee, can come in instant form, after all, it seems! It’s a wonder those catchy innovative ideas like the offerings in the Je me souviens coffret from L’artisan Parfumeur (long discontinued) don’t lure in the buying audiences at a larger scale. 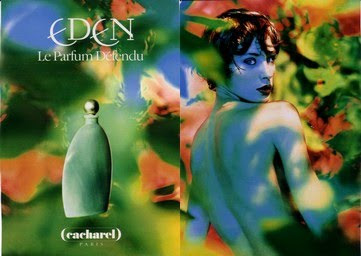 The bottle of the scent designed by Annegret Beier is completely friendly, in jade opaline, curved to fit in the palm of your hand, topped with a little green cap in the spray versions or a silvery boule in splash ones . Beautiful in its functionality.
When Eden first launched there was a big event that set new standards in the risky and costly mega –launches of perfumes: a whole garden recreated full with tropical and aquatic blooms and semi-clad girls in fountains following the cue of the print advertisements. Unfortunately, Eden didn’t sell that well, which incidentally is one of the reasons why it’s featured here today. In order not to lose such a highly covetable name and concept, Parfums Cacharel went on to create one of the first “flankers” of an original perfume, inaugurating a trend that has progressed so rapidly recently it has resulted in a dizzying exercise against Altzheimer's for us perfume lovers: It’s hard to keep up, I can tell you!
The follow up scent (i.e.the flanker) was Eau d’Eden and it is nice enough to warrant a separate review along the way. 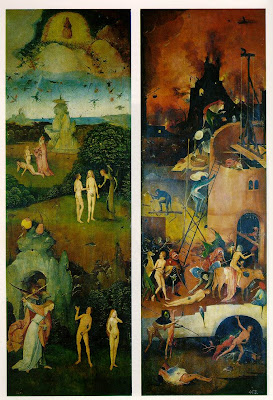 Back to the fragrance at hand, Eden, composed by Jean Guichard, opens on tart fruits, namely bergamot, lemon, mandarin, and pineapple alongside melon ( the overuse of Calone was the note du jour of the 90’s after all). A very green smell also makes itself present, mixed with the fruits and the watery notes: it's not a typical fruity, nor is it a typical aquatic nevertheless. In its heart the standard rose-jasmine accord that forms part of most feminine scents is not particularly evident, instead that tree with yellow poms poms, the mimosa, with its sweet sugary, milky smell is the protagonist along with aqueous blossoms like water lily and lotus and a strange anisic component that casts a retro oriental shade on the proceedings. But overall the fruity heart has an element of bubblegum, but the girl popping it is so cute you’d be unfair to chastise her!
The base relies on cedarwood and a hint of patchouli. Sandalwood, vanilla and musk are also featured, although they do not peak as such. That warm, not particularly sweet, rather odly spicy base prompted Luca Turin to liken it to the smell of a wet cashmere sweater, which was later revealed to not be a bad thing. Never thought it were…

The flowers and fruits are happily Serpent-free in their wholesomeness, pre-lapsarian, the garden of Eden safe from the advances of evil for the time being. Even if this is not your thing, Eden does not disappoint: it's a love-it-or-hate-it kind of fragrance, which means it has something going for it. The good sillage and very good longevity are also pluses in my books.