Tabac Blond (1919) was the opening salve of the garçonnes’ raid on gentlemen’s dressing tables. Its name evokes the “blonde” tobacco women had just started smoking in public (interestingly, Marlboros were launched as a women’s brand in 1924 with a red filter to mask lipstick traces). The fragrance was purportedly meant to blend with, and cover up, the still-shocking smell of cigarettes: smoking was still thought to be a sign of loose morals. 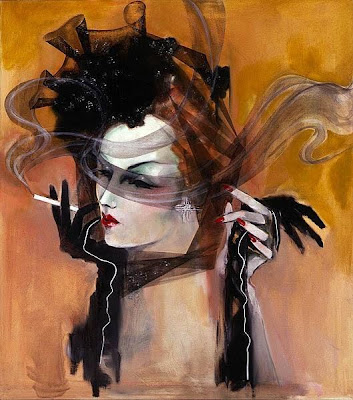 Despite its name, Tabac Blond is predominantly a leather scent, the first of its family to be composed for women and as such, a small but significant revolution. Though perfumery had recently started to stray from the floral bouquets thought to be the only fragrances suitable for ladies (Coty Chypre was launched in 1917), it had never ventured so far into the non-floral. Granted, there are floral notes, but apart from ylang-ylang, the clove-y piquancy of carnation and the cool powdery metallic note of iris don’t stray much from masculine territory. Amber and musk smooth down the bitter smokiness of the leather/tobacco leaf duet, providing the opulent “roundness” characteristic of classic Carons. And it is this ambery-powdery base – redolent of powdered faces and lipstick traces on perfumed cigarettes – that pulls the gender-crossing Tabac Blond back into feminine territory to the contemporary nose, despite Luca Turin’s calling it “dykey and angular and dark and totally unpresentable” in Chandler Burr’s Emperor of Scent. 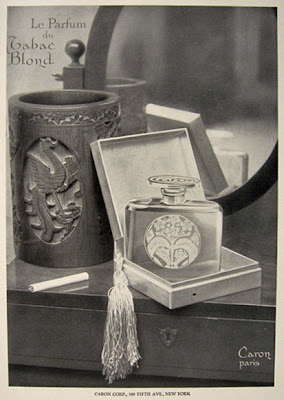 Like its younger sister Habanita (1921), Tabac Blond’s rich, golden-honeyed, slightly louche sillage speaks of late, smoke-laden nights at the Bal Nègre in the arms of Cuban aristocrats or déclassé Russian émigrés, rather than exhilarating rides in fast cars driven by the new Eves…

Editor's note on reformulation:
The current eau de toilette starts with the familiar rich, leathery, slightly carnation-floral scent, but the topnotes vanish within the hour, leaving you with the classic "vintage face powder" dry down - retro powdery vanilla and mossy notes, closer to Habanita.
*Share with link: Wednesday, November 24, 2010