Today's piece of fragrance history was prompted by an article in the Jakarta Post, dedicated on the creator of niche line Les Parfums de Rosine, Marie Hélène Rogeon, the woman who reintroduced the brand originally masterminded 80 years before by her antecentant, renowned couturier Paul Poiret for his beloved daughter Rosine (He established Les Ateliers de Martine for his younger daughter in the same year, 1911). 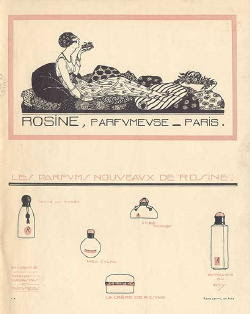 Rogeon established herself at Les Jardins du Palais Royal in Paris before Serge Lutens, in 1991 and they co-exist happily side by side ever since, a visit garlanded with memories of girly romanticism stacked against mystical opulence. Many of the original Rosine fragrances were created by legendary perfumer Henri Alméras, the composer of several legendary Jean Patou fragrances {click link for reviews} as well as Emannuel Bouler and Maurice Shaller. François Robert (for Rose d'Homme), Pierre Bourdon (for Roseberry), and Camille Latron (for the newer releases) have all contributed to the re-issued portfolio of Les Parfums de Rosine. The compositions follow a simple rule: They're above all dedicated to the kind of flowers, the rose, in various guises and manifestations. From the traditionally powder puff of iris-ladden Pousierre de Rose to the creamy, bright explosion of a pas de deux between rose and sandalwood in Rosa Flamenca through the lemony-tea infusion of Zeste de Rose and the mischievous spicy flirt to dirt of Diabolo Rose, Les parfums de Rosine offer an embarassement of riches for rose-maniacs. 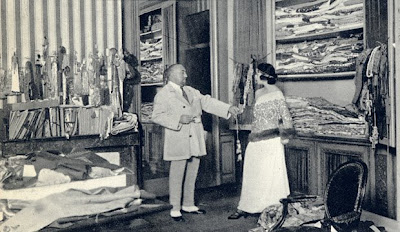 "Paul Poiret was a ground breaking designer that freed {sic} European women from their corsets. He launched a perfume line called Les Parfums de Rosine in honor of his deceased daughter Rosine {sic}. Rogeon's grandfather was commissioned to manufacture fragrances for him but did not create them himself. Later the great depression and war came, and production ceased. Poiret came back after the war only to find himself being replaced by new fashions like Coco Chanel and his fashion house disappeared. The perfume bottles disappeared too. Rogeon, though, met them really early in her life - in her grandparents' attic. "My grandparents kept some labels and some old bottles in their attic... unfortunately the perfume was sold out - there were only labels left," she said. "I realized also during my studies that this range of perfume was really creative because Paul Poiret just wanted to use some geraniums, nobody else used it before," she said. The creativity amazed her and prompted her to revive the manufacturing. She does not follow the original bottle design but kept the logo and the tassel, and the fragrance expected of de Rosine.
She has gone beyond the resurrection of the old fragrances - with some tweaking to follow modern safety regulations. She has come out with her own blends of rosy scents - for men and women - drawing her experiences from different cultures. In her hands, a rose is no longer about a rose. Rose blended with a musky leathery mix in Rose d'Homme, for example, brings out elegant masculinity in men. Rose Praline is like having a tint of chocolate herb tea while rushing through a rose bush, bringing that playful but yet not girly feeling. Rose Kashmirie is a garden of roses and Chinese peonies in one place. La Rose de Rosine combines ylang ylang, jasmine, iris and tonka beans in the same flower beds."

You can read the interesting article here. A list of the vintage Parfums de Rosine can be found on Perfume Projects.

Les Parfums de Rosine are available in Paris, at Barney's, at Rosenstein in Montreal, Canada, at Galleries Lafayette, at Body n'Soul in Athens, Greece, at Mecca Cosmetica in Australia, online at their official site , Beautyhabit & at Aus Liebe Zum Duft (First in Fragrance), and at the newest boutique at Papillion 2, Plaza Indonesia, in Jakarta.

If you have a favourite Rosine, come out and let us know which and why you love it!