"With Iris Nazarena eau de parfum", perfume creator Ralf Schwieger explains "I had to face two major challenges: to find a point of difference with Chanel No. 19, which has always been a reference point for iris-based scents and an unsurpassable model since its launch in 1971, and to incorporate transparency so that the beauty of the Nazarene iris would be best expressed". 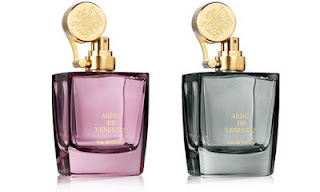 The second eponymous fragrance by niche haven Aedes de Venustas in Greenwich Village, New York City is launching this June and is inspired by the Bismarck variety of iris, also known by the name of Nazarene iris thanks to growing in the mountains east of Nazareth, which piqued Karl Brad's (the co-founder of Aedes) interest.

In Aedes de Venustas Iris Nazarena ambrette, with its facets of pear, rose and musk, is luminous on the top notes while juniper berries introduce the theme of incense. The fresh and vivid green star anise evokes the stylized leaves and stems of the flower with woody notes such as patchouli and vetiver alluding to the roots in the earth. The clay like earthiness is further warmed by touches of cloves and oud.