Perfume Off the Titanic

"Thousands of authentic artifacts from the exhibition, pulled from the remains of the sunken Titanic, are destined for the auction block. The New York Times reports that 5,500 items, including fine china and old bottles of perfume, will be actioned off at Guernsey's on April 1st. Estimated value of the pieces? $189 million. 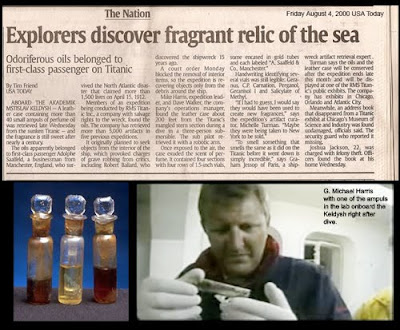 Rather poignantly, the results of the auction will be announced on April 15, exactly a century after the famous ship came to its legendary end. The artifacts, although long at sea, are the result of various expeditions over the years, as AP notes, including underwater excursions as far back as 1987.
While we're not as enthused about buying a hunk of plywood or other pieces of the ship, the notion of owning a still-fragrant vial of perfume is strangely intriguing. AP writes that the fragrance belonged to a manufacturer who was planning to sell his perfume samples in New York.
Now his bottles have finally made it."[source]

Please also remember that there is Night Star, perfume of the Titanic by company Scents of Time, produced by David Pybus in collaboration with Chris Sheldrake.